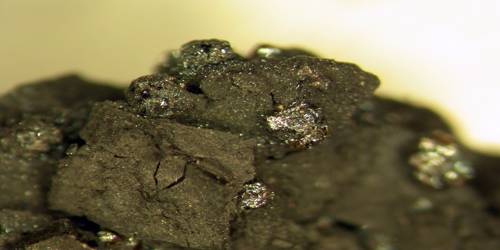 Cementite is an intermetallic compound of iron and carbon, more precisely intermediate transition metal carbide with the formula Fe3C. It is iron carbide, a constituent of steel and cast iron, sometimes with part of its iron replaced by another metal, as manganese. By weight, it is 6.67% carbon and 93.3% iron. It has an orthorhombic crystal structure.

It is a hard, brittle material, normally classified as a ceramic in its pure form, and is a frequently found an important constituent in ferrous metallurgy. While iron carbide is present in most steels and cast irons, it is produced as a raw material in the iron carbide process, which belongs to the family of alternative ironmaking technologies. Cementite changes from ferromagnetic to paramagnetic at its Curie temperature of approximately 480 K.

A natural iron carbide (containing minor amounts of nickel and cobalt) occurs in iron meteorites and is called cohenite after the German mineralogist Emil Cohen, who first described it. As carbon is one of the possible minor light alloy components of metallic planetary cores, the high-pressure/high-temperature properties of cementite (Fe3C) as a simple proxy for cohenite are studied experimentally.