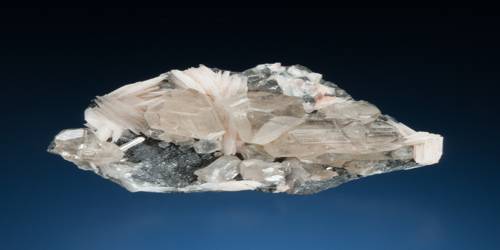 Cerussite (also known as lead carbonate or white lead ore) is a mineral consisting of lead carbonate (PbCO3), and an important ore of lead. The mineral belongs to the aragonite group. The name is from the Latin cerussa, white lead. Cerussa nativa was mentioned by Conrad Gessner in 1565, and in 1832 F. S. Beudant applied the name cruise to the mineral, whilst the present form, cerussite, is due to W. Haidinger (1845). Miners’ names in early use were lead-spar and white-lead-ore. Cerussite can be identified in the field by its color variations, such as white, gray, blue, and green. It is sometimes colorless. This mineral has an adamantine luster with a white streak. The fracture of this mineral is brittle – conchoidal. The density of cerussite is 6.58 g/cm3 with a hardness of 3-3.5- between calcite and copper penny.

Cerussite crystallizes in the orthorhombic system and is isomorphous with aragonite. Like aragonite it is very frequently twinned, the compound crystals being pseudo-hexagonal in form. Three crystals are usually twinned together on two faces of the prism, producing six-rayed stellate groups with the individual crystals intercrossing at angles of nearly 60°. The mineral also occurs in compact granular masses, and sometimes in fibrous forms. The mineral is usually colorless or white, sometimes grey or greenish in tint and varies from transparent to translucent with an adamantine luster. It is very brittle and has a conchoidal fracture. It has a Mohs hardness of 3 to 3.75 and a specific gravity of 6.5. A variety containing 7% of zinc carbonate, replacing lead carbonate, is known as iglesiasite, from Iglesias in Sardinia, where it is found.

The mineral may be readily recognized by its characteristic twinning, in conjunction with the adamantine luster and high specific gravity. It dissolves with effervescence in dilute nitric acid. A blowpipe test will cause it to fuse very readily, and gives indications for the lead.

Cerussite occurs commonly in the oxidized zone of lead deposits, where it may constitute an important ore. It is often associated with minerals such as anglesite, smithsonite, pyromorphite, malachite, phosgenite, Galena, and azurite.

Finely crystallized specimens have been obtained from the Friedrichssegen mine in Lahnstein in Rhineland-Palatinate, Johanngeorgenstadt in Saxony, Stříbro in the Czech Republic, Phoenixville in Pennsylvania, Broken Hill in New South Wales, and several other localities. Delicate acicular crystals of considerable length were found long ago in the Pentire Glaze mine near St Minver in Cornwall. Cerussite is often found in considerable quantities and has a lead content of up to 77.5%.