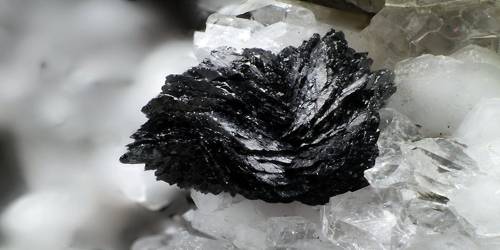 Cervandonite is a rare arsenosilicate mineral. It has a chemical formula (Ce,Nd,La) (Fe3+,Fe2+,Ti4+,Al)3 SiAs(Si,As)O13 or (Ce,Nd,La)(Fe3+,Fe2+,Ti,Al)3 O2(Si2 O7)(As3+O3)(OH). Cervandonite-(Ce) was named after Pizzo Cervandone, a place on the border between Italy and Switzerland, where the mineral was first discovered. It was first described by Buhler Armbruster in 1988, but it has proven to be a problem due to the extreme scarcity of single crystals and its unusual replacement of silicon and arsenic. Cervandonite is named after the location where it was first described, Pizzo Cervandone (Scherbadung), Italy in the Central Alps. Cervandonite-(Ce) can be identified in the field by its black color. Its translucent to opaque form has {001} indistinct cleavage. This mineral has an adamantine luster, with the brownish-black streak. The fracture of this mineral is brittle–conchoidal.

The hardness of cervandonite-(Ce) is 5 – approximate to apatite.

The color of the mineral is a black, with the transmitted light it will reflect a yellowish, reddish brown to black color. The mineral is brittle, porous, rosettelike aggregate, with adamantine luster, poorest at {001} cleavage, conchoidal fracture with a brownish-black streak, and a hardness= 5.0. Although cervandonite was found in Pizzo Cervandone, it is not the only rare mineral discovered there, much like the crystal fetiasite, which shares common morphology, fetiasite has a thin brown-red alteration layer with the perfect cleavage is on {100}.

It is often associated with minerals such as senaite, chernovite, anatase, muscovite, synchysite, albite, tourmaline, magnetite, hematite, rutile, quartz, and chlorite. Cervandonite was discovered in the east region of Pizzo Cervandone, Alpe Devero, on the border of Italy and Switzerland, and on the west region of Cherbadung, Switzerland. This mountain is well known for Alpine excursionists and mineral collectors. It was known the 1960s as a site for rare and new minerals.