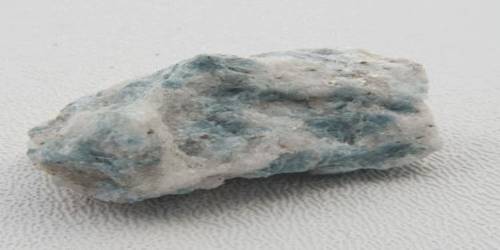 Cesanite is the end member of the apatite-wilkeite-ellestadite series that substitutes all of apatite’s phosphate ions with sulfate ions and balances the difference in charge by replacing several calcium ions with sodium ions. It was named after the place of its discovery: near Cesano, Italy. Currently, very few sites bearing cesanite have been found and are limited to a geothermal field in Cesano, Italy from which its name is derived, Măgurici Cave in Romania, and in the San Salvador Island caves in the Bahamas. Cesanite can be identified in the field by its white color. It is sometimes colorless. Its transparent form has a white streak. The density of cesanite is 2.786 g/cm, with a hardness of 2 to 3 – between gypsum and calcite.

Cesanite veins are massive in habit and appear white in color with a silky luster. Individual crystals are colorless and transparent to translucent with a greasy luster.

Cesanite occurs as vein and cavity fillings in brecciated rock in an active geothermal field. It is often associated with minerals such as gorgeyite, glauberite, gypsum, pyrite, anhydrite, aphthitalite, and kalistrontite.

Cesanite has been found in only three places to date. The original occurrence was observed as part of a fracture sealing process where cesanite crystals grew to fill in the void. It was found growing in a loosely packed vein of small crystals that became intergrown with those of the neighboring görgeyite crystals. Further occurrences have been noticed in several caves. First, in 2001 inside of Lighthouse Cave located on San Salvador Island filling in gaps in corroded gypsum and in 2003 inside Măgurici Cave in Romania, it was found in close association with hydroxylapatite.