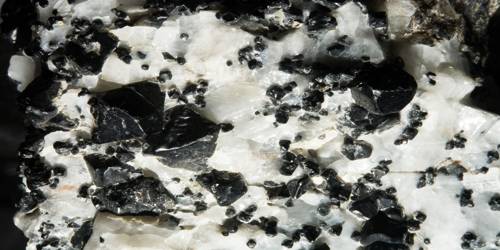 Ceylonite is dingy blue or grey with black varieties of spinel. It is a dark-colored spinel, called also pleonaste. It was named after the island of Ceylon. It is a ferroan Spinel with a ratio Mg : Fe from 3:1 and 1:1, and little or no ferric iron. It is magnesium spinel containing traces of iron, which gives it a dark green to black color.

The ceylonite first discovered on the island of Ceylon, modern day Sri Lanka, was found embedded in the calcareous spar and accompanied by pyrite and micas. Ceylonite, named for the island of Ceylon, is a ferroan spinel with Mg : Fe from 3:1 and 1:1, and little or no ferric iron. The crystals were located in a low lying dried up the river, and were relatively shallow in the soil; 8 to 10 inches. On one side of the bank, a mass of gneiss was exposed, on the other, a graphic granite vein.

The grains in the first discovered ceylonite looked of compacted soils, leading one to believe they were perhaps sedimentary in formation. This was an early hypothesis and did not hold true after further analysis.

The Mg-ceylonite has a much more reliable study of its geological occurrence. It is found in Mg and Al rich igneous rocks, as well as, metamorphic rock. Like many rocks and mineral, ceylonite is weathered and can be found in sedimentary rocks.