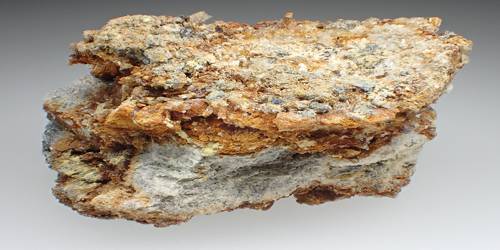 Chaidamuite is a rare zinc – iron sulfate mineral with chemical formula: ZnFe3+(SO4)2(OH)·4H2O. It is a triclinic-pedial mineral contain ing hydrogen, iron, oxygen, sulfur, and zinc. It was named after the place of its occurrence, near Chaidamu in China. It was first described for an occurrence in the Xitieshan mine south of Mt. Qilianshan in the Chaidamu basin, Qinghai Province, China and was named for the locality. Chaidamuite can be identified in the field by its color variations, such as brown and yellowish-brown. Its translucent form has {001} perfect and {100} perfect cleavage. This mineral has a vitreous luster, with a light yellow streak.

The density of chaidamuite is 2.722 g/cm3 with a hardness of 2.5 to 3 – between fingernail and calcite. It is non-fluorescent.

It occurs as an oxidation phase in a lead-zinc deposit. In the type locality, it is associated with the rare minerals: coquimbite, copiapite, butlerite, and zincobotryogen. In addition to the Chinese occurrence, it has been reported from the Getchell Mine in the Potosi District in Humboldt County, Nevada.