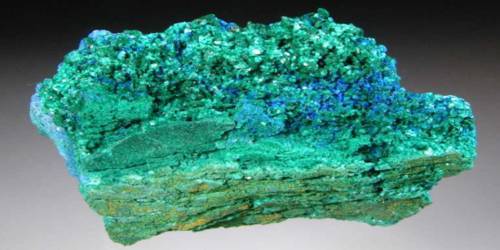 Chalcophyllite has a green streak and that combined with its crystal habit make chalcophyllite difficult to misidentify. The mineral is named after the Greek, chalco “copper” and fyllon, “leaf”, in allusion to its composition and platy structure. It is a classic Cornish mineral that can be confused with tabular spangolite. The mineral is soft, with hardness only 2, the same as gypsum. Specific gravity is generally given in the range 2.67 to 2.69, but Webmineral has 2.4 to 2.66. Chalcophyllite is soluble in acids and in ammonia. It is not fluorescent, nor radioactive. The water content varies at room temperature based on relative humidity.

Chalcophyllite is an uncommon mineral that occurs as a secondary mineral in oxidized arsenic-bearing hydrothermal, polymetallic deposits. Localities for Chalcophyllite include in Germany, Austria, Russia, England, France, the United States, Chile, and New Zealand as well as other more minor localities.