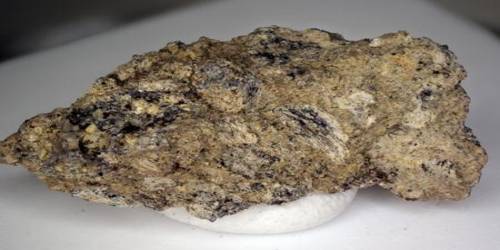 At the type locality in Bavaria, chaoite occurs in graphite bearing gneiss that has undergone shock metamorphism. It has also been reported from meteorites including the Goalpara meteorite in Assam, the Dyalpur meteorite in Uttar Pradesh in India and the Popigai impact crater in the Anabarskii massif of Eastern Siberia. Minerals associated with chaoite include graphite, zircon, rutile, pseudobrookite, magnetite, nickeliferous pyrrhotite and baddeleyite. From its electron diffraction pattern, the mineral has been considered to have a carbyne structure, the linear acetylenic carbon allotrope of carbon. A later report has called this identification, and the very existence of carbyne phases, into question, arguing that the new reflections in the diffraction pattern are due to clay impurities.

Chaoite was first described from Möttingen, Ries Crater, Nördlingen, Bavaria, Germany and approved by the IMA in 1969. The mineral was named for USGS petrologist Edward C. T. Chao (1919-2008).