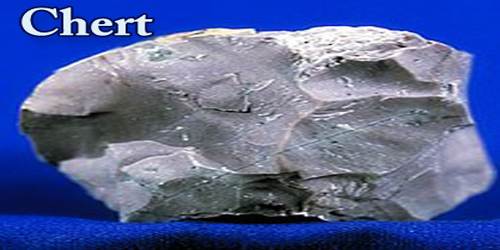 Chert is usually of biological origin, being the petrified remains of siliceous ooze, the biogenic sediment that covers large areas of the deep ocean floor, and which contains the silicon skeletal remains of diatoms, silicoflagellates, and radiolarians. Depending on its origin, it can contain either microfossils, small macrofossils, or both. It varies greatly in color (from white to black), but most often manifests as gray, brown, grayish brown and light green to rusty red (occasionally dark green too); its color is an expression of trace elements present in the rock, and both red and green are most often related to traces of iron (in its oxidized and reduced forms respectively).

Chert breaks with a conchoidal fracture, often producing very sharp edges. Early people took advantage of how chert breaks and used it to fashion cutting tools and weapons. “Chert” and “flint” are names used for the same material. Both are varieties of chalcedony.

Occurrence and Properties of Chert –

Chert occurs in a wide variety of colors. Continuous color gradients exist between white and black or between cream and brown. Green, yellow, orange, and red cherts are also common. The darker colors often result from inclusions of mineral matter and organic matter. Abundant iron oxides in the chert can produce a red color. The name “jasper” is frequently used for these reddish cherts. Abundant organic material can produce gray or black chert. The name “flint” is often used in reference to the darker colors of chert.

Chert actually occurs in carbonate rocks as oval to irregular nodules in greensand, limestone, chalk, and dolomite formations as a replacement mineral, where it is formed as a result of some type of diagenesis. Where it occurs in chalk or marl, it is usually called flint. It also occurs in thin beds, when it is a primary deposit (such as with many jaspers and radiolarites). Thick beds of chert occur in deep marine deposits. These thickly bedded cherts include the novaculite of the Ouachita Mountains of Arkansas, Oklahoma, and similar occurrences in Texas and South Carolina in the United States. The banded iron formations of Precambrian age are composed of alternating layers of chert and iron oxides.

Chert is as hard as crystalline quartz with a hardness rating of seven in the Mohs scale maybe a bit softer, 6.5, if it still has some hydrated silica in it. Beyond simply being hard, chert is a tough rock. It stands above the landscape in outcrops that resist erosion. Oil drillers dread it because it’s so hard to penetrate. It has a curvy conchoidal fracture that is smoother and less splintery than the conchoidal fracture of pure quartz; ancient toolmakers favored it, and high-quality rock was a trade item between tribes.

Composition of Chert: Chert is a microcrystalline silicon dioxide (SiO2). As chert nodules or concretions grow within a sediment mass, their growth can incorporate significant amounts of the surrounding sediment as inclusions. These inclusions can impart a distinctive color to the chert.

Classification and Types of Chert –

There are many varieties of chert, that classified visible, microscopic and physical characteristics

Other lesser used terms for chert (most of them archaic) include firestone, silex, silica stone, chat, and flintstone.

The cryptocrystalline nature of chert, combined with its above average ability to resist weathering, recrystallization and metamorphism has made it an ideal rock for preservation of early life forms.

Chert is not found everywhere. It was a precious commodity that early people traded and transported long distances. As early as 8000 BC, the people of what are now England and France dug shafts up to 300 feet deep into layers of soft chalk to mine chert nodules. These are some of the oldest underground mining operations ever discovered.

The colors of chert range from white through red and brown to black, depending on how much clay or organic matter it contains. It often has some sign of its sedimentary origin, such as bedding and other sedimentary structures or microfossils. They may be abundant enough for a chert to get a special name, as in the red radiolarian chert carried to land by plate tectonics from the central ocean floor.

Chert has very few uses today; however, it was a very important tool-making material in the past. Chert has two properties that made it especially useful: 1) it breaks with a conchoidal fracture to form very sharp edges, and, 2) it is very hard (7 on the Mohs Scale).

In prehistoric times, it was often used as a raw material for the construction of stone tools. When a chert stone is struck against steel, sparks result. This makes it an excellent tool for starting fires, and both flint and common chert were used in various types of fire-starting tools, such as tinderboxes, throughout history.

In some areas, it is ubiquitous as stream gravel and fieldstone and is currently used as construction material and road surfacing.

Part of chert’s popularity in road surfacing or driveway construction is that rain tends to firm and compact chert while other fill often gets muddy when wet. However, where cherty gravel ends up as fill-in concrete, the slick surface can cause localized failure. It has been used in late nineteenth-century and early twentieth-century headstones or grave markers in Tennessee and other regions.

Chert is a very hard material that produces a spark when it is struck against steel. The heat from this spark can be used to start fires. A “flintlock” is an early firearm in which a charge of gunpowder is ignited by a flint hammer striking a metal plate. A variety of metamorphosed chert known as “novaculite” has a porous, even texture that makes it useful as a sharpening stone.