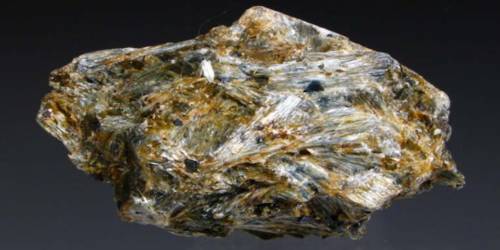 Chesterite [(Mg, Fe)17Si20O54(OH)6] is a rare silicate mineral that can be compared to amphiboles, micas, and jimthompsonite. It is a basic inosilicate of magnesium and iron. It is named after Chester, Vermont, where it was first described in 1977. The specific geologic setting within its origin is the Carleton talc quarry in Chester, Vermont. Chesterite is an anisotropic mineral; therefore, it allows light to travel through it at different velocities when viewed at different angles. Chesterite is usually found in thin sheets within ultramafic rocks.

A polytype of chesterite could be anthophyllite, which has a similar crystal structure.

Occurrence: In black wall-rock between chlorite and actinolite zones of a metamorphosed ultramafic body.

Chesterite has an orthorhombic crystal structure, which means it has three crystallographic axes of unequal length. All of the axes are perpendicular to each other. The stacking sequence for chesterite, which is found in micas, is very similar to orthopyroxenes and orthoamphiboles.