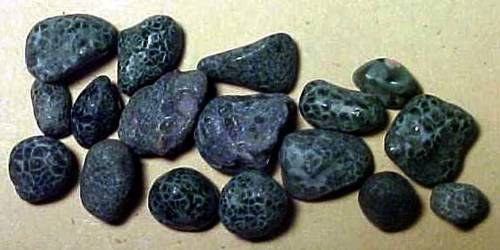 Chlorastrolite (also known as Isle Royale Greenstone), is a green or bluish green stone. It is named from Greek “chloros” – green, and “astros” – star. It is a mineral like a prehnite that occurs as green pebbles of a stellate structure and is found near Lake Superior. It has a delicate green color and radiated or stellate structure, and takes a high polish.The most desirable pattern resembles tortoiseshell. It is widely used in jewelry items that are not subjected to heavy wear. Chlorastrolite has finely radiated or stellate masses that have a “turtleback” pattern. The stellate masses tend to be chatoyant, meaning they have a changeable luster. This chatoyancy can be subtranslucent to opaque.

Chlorastrolite occurs as amygdaloid structures and fracture fillings in basalt, and when the water and wave action has worn away the basalt, they are found as beach pebbles and granules in loose sediments. It is found in the Keweenaw Peninsula of the Upper Peninsula of Michigan and Isle Royale in Lake Superior. Isle Royale is a National Park, and so it is illegal to collect specimens there. It is difficult to identify an unpolished pebble of chlorastrolite. Most gem quality chlorastrolite stones are very small, and it is rare to find one that is larger than a half inch. The largest gem quality stone is in the Smithsonian Museum and measures 1.5 by 3 inches.

It was first described from Isle Royale, Lake Superior by C. T. Jackson and J. D. Whitney in 1847. Chlorastrolite, also known as greenstone, is the official state gem of Michigan.