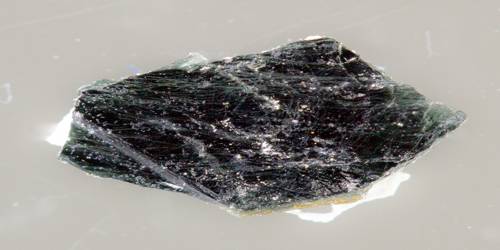 Chloritoid is a silicate mineral of metamorphic origin. It is an iron-magnesium manganese alumino-silicate hydroxide with the formula: (Fe, Mg, Mn)2Al4Si2O10(OH)4. It is a silicate mineral that was first described in 1837, from the Ural Mountains region of Russia. It was named for its similarities of the chlorite-group minerals.

It was first described in 1837 by localities in the Ural Mountains region of Russia. It was named for its similarity to the chlorite group of minerals. Chloritoid is non-fluorescent and occurs in a range of colors, from dark gray to dark green, grayish-black, green-black, and green-gray. It has a transparent to translucent appearance, with pearly luster and green-gray streak. Its fractures are brittle, like that of non-metallic minerals and glasses. It exhibits two-dimensional platy forms or massive crystal forms.

It occurs as greenish grey to black platy micaceous crystals and foliated masses. Its Mohs hardness is 6.5, unusually high for a platy mineral, and it has a specific gravity of 3.52 to 3.57. It typically occurs in phyllites, schists, and marbles.