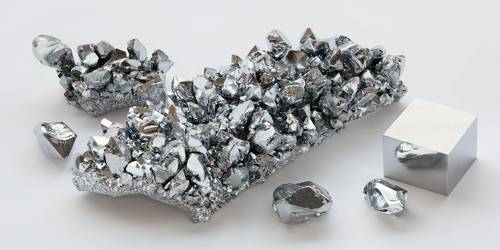 Chromium is a chemical element with symbol Cr and atomic number 24. It is a lustrous, brittle, hard metal. Its color is silver-gray and it can be highly polished. It is the first element in group 6. It is a steely-gray, lustrous, hard and brittle metal which takes a high polish, resists tarnishing, and has a high melting point.

It is a steely-gray lustrous, brittle, hard metal. It is known to have high corrosion resistance. When polished, it gains a very shiny surface, which is used to plate other metals so as to form a protective and attractive covering.

Chromium is a transition metal in Group 6 on the Periodic Table of Elements. In its pure form, it is a silvery, lustrous, hard metal that has a high polish, ideal for electroplating. Chromium metal is of high value for its high corrosion resistance and hardness. A major development in steel production was the discovery that steel could be made highly resistant to corrosion and discoloration by adding metallic chromium to form stainless steel. Stainless steel and chrome plating (electroplating with chromium) together comprise 85% of the commercial use.

Trivalent chromium (Cr(III)) ion is an essential nutrient in trace amounts in humans for insulin, sugar and lipid metabolism, although the issue is debated.

Chromium is mined as chromite (FeCr2O4) ore. About two-fifths of the chromite ores and concentrates in the world are produced in South Africa, about a third in Kazakhstan, while India, Russia, and Turkey are also substantial producers. Untapped chromite deposits are plentiful but geographically concentrated in Kazakhstan and southern Africa.

Chromium is mined as chromite ore. Globally this ore is available in India, South Africa, Finland, Zimbabwe, Kazakhstan and the Philippines. Commercially, chromium is produced from chromite using silicothermic or aluminothermic reactions. Roasting and leaching processes are also used.