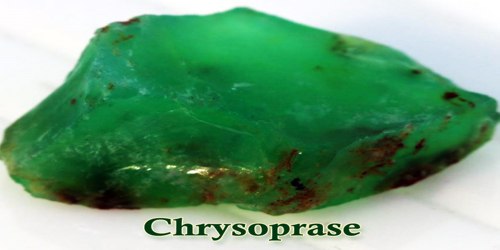 ‘Chrysoprase’, chrysophrase or chrysoprasus is the name of a translucent chalcedony that ranges in color between yellowish-green and green. Its green color is usually caused by traces of nickel. Beautiful green chrysoprase is the second most valuable variety of chalcedony after gem silica.

The name “chrysoprase” is from the Greek words for “golden apple” or “golden leek” (Greek χρυσός chrysos meaning ‘gold’ and πράσινον prasinon, meaning ‘green’). Today it is most often used for making beads and cabochons. Exceptional pieces of chrysoprase are sometimes cut into translucent faceted stones.

Chrysoprase is cryptocrystalline, which means that it is composed of crystals so fine that they cannot be seen as distinct particles under normal magnification. This sets it apart from rock crystal, amethyst, citrine, and the other varieties of crystalline quartz. Other members of the cryptocrystalline silica family include agate, carnelian, and onyx. Unlike many non-transparent silica minerals, it is the color of chrysoprase, rather than any pattern of markings, that makes it desirable.

Chrysoprase as a gemstone was known to the ancient Greeks and Romans. A few pieces have been found among their artifacts, but its use in that time was not common. Chrysoprase first became a popular gem in Europe after deposits in Poland were discovered in the 1700s. Today, most chrysoprase is produced in Australia, but it is not widely used because supplies are limited. 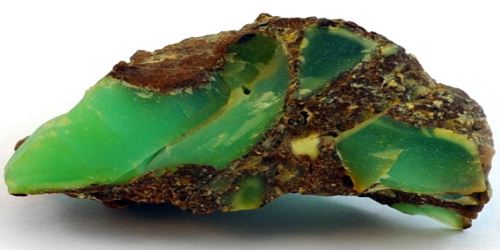 Meaning and Properties of Chrysoprase –

In the larger context of our mysterious and expansive universe, the Chrysoprase crystal is part of the pale blue-green color ray.

Unlike emerald which owes its green color to the presence of chromium, the color of chrysoprase is due to trace amounts of nickel compounds in the form of very small inclusions. The nickel reportedly occurs as different silicates, like kerolite or pimelite (not NiO mineral, bunsenite, as was reported before). Chrysoprase results from the deep weathering or lateritization of nickeliferous serpentinites or other ultramafic ophiolite rocks. In the Australian deposits, chrysoprase occurs as veins and nodules with brown goethite and other iron oxides in the magnesite-rich saprolite below an iron and silica cap.

The crystals in chrysoprase are so fine that they cannot be seen under a magnifying glass much finer than the crystals that color amethyst or rose quartz. This stone has been popular for thousands of years because of its bright color. The name literally means “golden leek” in Greek, because this stone looks so bright that it might have come from nature.

The Ancient Greeks said that chrysoprase was the sacred stone of Aphrodite, whose sacred color was green. Chrysoprase is found all over the world. The best-known sources of chrysoprase are Indonesia, Queensland, Western Australia, Haneti Tanzania, Germany, Poland, Russia, Arizona, California, and Brazil. Deposits in central Tanzania have been in constant production since 1986. The chrysoprase and Ni silicate ore deposit in Szklary, Lower Silesia, Poland, was probably the biggest European chrysoprase occurrence and possibly also the biggest in the world.

A very similar mineral to chrysoprase is chrome chalcedony, in which the color is provided by chromium rather than nickel.

Although chrysoprase is a highly valued variety of chalcedony, it is rarely seen in the gem and jewelry market. Thus, it is out-of-mind with the average jewelry shopper. It is rarely seen in commercial jewelry because stones of consistent color and calibrated sizes are difficult to obtain in large quantities. Chrysoprase is most often seen in stores and on websites that sell designer, limited production, or one-of-a-kind jewelry items.

Wearing chrysoprase as jewelry is both easy and beneficial, and any sort of jewelry works perfectly well for this, from a pendant to a brooch to earrings or bangles.