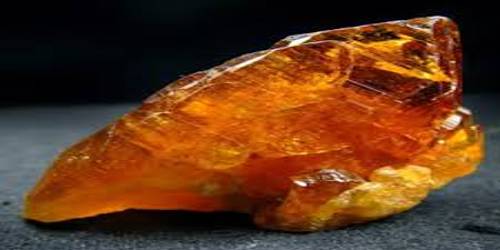 Clinohumite is an uncommon member of the humite group, a magnesium silicate according to the chemical formula (Mg, Fe)9(SiO4)4(F, OH)2. It was first discovered in metamorphosed limestone ejected from Mt Vesuvius in 1876. The name reflects its monoclinic structure and a similarity to humite. The formula can be thought of as four olivines (Mg2SiO4), plus one brucite (Mg(OH)2). Indeed, the mineral is essentially a hydrated olivine and occurs in altered ultramafic rocks and carbonatites.

Clinohumite is a mineral found as small grains in the marbles of contact metamorphic environments. Only two sources of gem-quality material are known: the Pamir Mountains of Tajikistan, and the Taymyr region of northern Siberia. It is one of two humite group minerals that have been cut into gems, the other being the much more common chondrodite. A monoclinic mineral, clinohumite is typically a dark to light brownish or orangy yellow, somewhat resembling the hessonite variety of grossular. It is brittle with a hardness of 6 and a poor basal cleavage. Its specific gravity is 3.2–3.4, and its fracture is conchoidal to uneven; its streak is white.

Clinohumite is a product of contact metamorphism and is commonly found as indistinct grains embedded in limestone. Its type occurrence is within the limestone ejecta of the Mount Vesuvius volcano complex near Naples, Italy, where clinohumite was discovered in 1876. The aforementioned gem-quality occurrences of Pamir and Taymyr were discovered only recently: the former in the early 1980s, and the latter in 2000.

Clinohumite from Pamir Mountains, Tadzhikistan, Russia has been cut as a brilliant yellow-orange gemstone, but it is rare and sought after only by collectors.