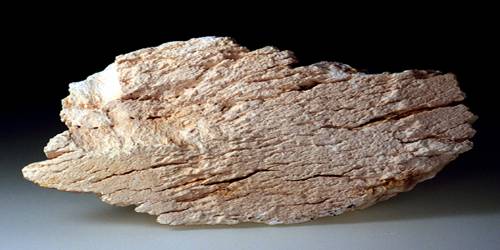 Coesite is a form (polymorph) of silicon dioxide SiO2 that is formed when very high pressure (2–3 gigapascals), and moderately high temperature (700°C, 1,300°F), are applied to quartz. It is a dense crystalline silica formed from quartz under great heat and pressure and found in meteorite craters. It is a high-pressure polymorph of silica found in extreme conditions such as the impact craters of meteorites.

Coesite was first synthesized by Loring Coes Jr., a chemist at the Norton Company, in 1953. It has also been identified in kimberlites where other high-pressure minerals such as diamond are found. The structure of coesite is composed of SiO4 tetrahedrons that are linked into four-membered rings. The rings are then linked together into a chain-like structure. This structure is much more compact than the other members of the quartz group, except stishovite, and is reflected in the higher density and index of refraction.

In 1960, a natural occurrence of coesite was reported by Edward C. T. Chao, in collaboration with Eugene Shoemaker, from Barringer Crater, in Arizona, US, which was evidence that the crater must have been formed by an impact. After this report, the presence of coesite in unmetamorphosed rocks was taken as evidence of a meteorite impact event or of an atomic bomb explosion. It was not expected that coesite would survive in high-pressure metamorphic rocks.

Coesite has been identified in UHP metamorphic rocks around the world, including the western Alps of Italy at Dora Maira, the Erzgebirge of Germany, the Lanterman Range of Antarctica, in the Kokchetav Massif of Kazakhstan, in the Western Gneiss region of Norway, the Dabie-Shan Range in Eastern China, and the Himalayas of Eastern Pakistan.