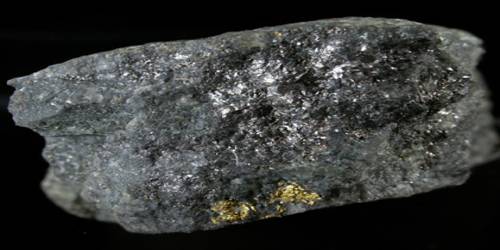 Coloradoite, also known as mercury telluride (HgTe), is a rare telluride ore associated with metallic deposit (especially gold and silver). It is a mineral, mercury telluride, HgTe, occurring in the form of grayish-black masses. Gold usually occurs within tellurides, such as coloradoite, as a high-finess native metal. Tellurides are ingrown into ores containing these precious metals and are also responsible for a significant amount these metals being produced.

First discovered in Colorado in 1877, other deposits containing coloradoite have been discovered since then. Although it plays an important role in the geology of minerals, it can also be used for other purposes. Coloradoite is a brittle, massively granular mineral, with a hardness of 2.5. It has a metallic luster, which could be explained by the presence of metallic bonding in the crystal. Its specific gravity is 8.10 and is an opaque mineral with colors iron-black inclining to gray; in polished sections, and white with slight grayish brown tint, tarnishing to dull purple.

Coloradoite was first discovered in 1877 by F. A. Genth, from the Smuggler Mine at Ballarat and the Keystone and Mountain Lion mines of the Magnolia district in Colorado; it was named after the state it was found in. Later studies showed its existence in other mines of the region as well as Kalgoorlie, Australia and Kirkland Lake District, Canada.