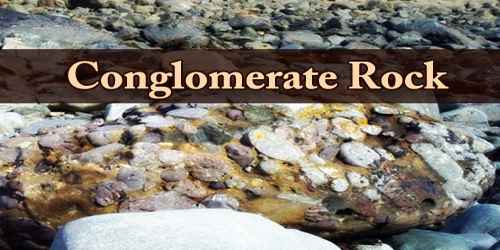 Conglomerate (/kənˈɡlɒmərɪt/) is a clastic sedimentary rock consisting of rounded fragments greater than 2 millimetres (0.08 inch) in diameter. The rounding of the clasts show that rocks have been transported a long way from their source or on a seaside tide to wave movement. The clast cement is usually calcite, silica or iron oxide but the matrix can consist only of the cementing cloth, however can also include sand and/or silt sized clasts cemented together the various coarser clasts.

Conglomerate is commonly contrasted with breccia, which consists of angular fragments. Conglomerates are usually subdivided according to the average size of their constituent materials into pebble (fine), cobble (medium), and boulder (coarse). The size and composition of the gravel-size fraction of a conglomerate may or may not vary in composition, sorting, and size. In some conglomerates, the gravel-size class consist almost entirely of what were clay clasts at the time of deposition.

Conglomerates can be found in sedimentary rock sequences of all ages but probably make up less than 1 percent by weight of all sedimentary rocks. In terms of origin and depositional mechanisms, they are closely related to sandstones and exhibit many of the same types of sedimentary structures, e.g., tabular and trough cross-bedding and graded bedding.

The following characteristics are used to classify and categorize conglomerate rock: 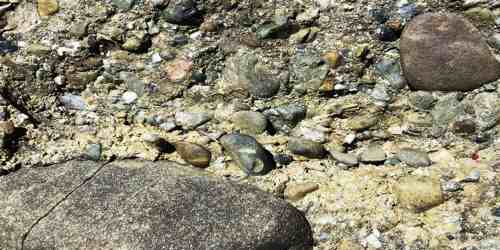 Conglomerates are deposited in a variety of sedimentary environments.

Deepwater marine – In turbidites, the basal part of a bed is typically coarse-grained and sometimes conglomeratic. In this setting, conglomerates are normally very well sorted, well-rounded, and often with a strong A-axis type imbrication of the clasts.

Shallow marine – Conglomerates are normally present at the base of sequences laid down during marine transgressions above an unconformity and are known as basal conglomerates. They represent the position of the shoreline at a particular time and are diachronous.

Fluvial – Conglomerates deposited in fluvial environments are typically well rounded and well sorted. Clasts of this size are carried as bedload and only at times of high flow-rate. The maximum clast size decreases as the clasts are transported further due to attrition, so conglomerates are more characteristic of immature river systems. In the sediments deposited by mature rivers, conglomerates are generally confined to the basal part of a channel fill where they are known as pebble lags. Conglomerates deposited in a fluvial environment often have an AB-plane type imbrication.

Alluvial – Alluvial deposits form in areas of high relief and are typically coarse-grained. At mountain fronts individual alluvial fans merge to form braidplains and these two environments are associated with the thickest deposits of conglomerates. The bulk of conglomerates deposited in this setting are clast-supported with a strong AB-plane imbrication. Matrix-supported conglomerates, as a result of debris-flow deposition, are quite commonly associated with many alluvial fans. When such conglomerates accumulate within an alluvial fan, in rapidly eroding (e.g., desert) environments, the resulting rock unit is often called a fanglomerate.

Glacial – Glaciers carry a lot of coarse-grained material and many glacial deposits are conglomeratic. tillites, the sediments deposited directly by a glacier, are typically poorly sorted, matrix-supported conglomerates. The matrix is generally fine-grained, consisting of finely milled rock fragments. Waterlaid deposits associated with glaciers are often conglomeratic, forming structures such as eskers. 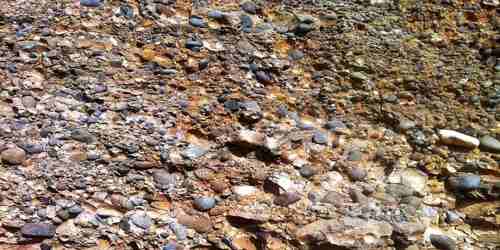 Conglomerate can have a variety of compositions. As a clastic sedimentary rock, it can contain clasts of any rock material or weathering product that is washed downstream or down current. The rounded clasts of conglomerate can be mineral particles such as quartz, or they can be sedimentary, metamorphic, or igneous rock fragments. The matrix that binds the large clasts together can be a mixture of sand, mud, and chemical cement.

Conglomerate can be formed at an areas where strong water current exist like mountain down slope where water has enough current flow that it can carry the rock fragments above 2 millimetre. It can also be formed at beaches where water current is strong and rock fragments are available to be accumulated for forming conglomerate. Conglomerate is formed when large clast pebble or cobble size fragments transported and deposited than the finer grained fills the spaces in between the clast.

Properties and Uses of Conglomerate –

The key characteristic of conglomerate is the presence of readily visible, rounded clasts bound within a matrix. The clasts tend to feel smooth to the touch, although the matrix can be either rough or smooth. The hardness and color of the rock is highly variable.

Many conglomerates are colorful and attractive rocks, but they are only rarely used as an ornamental stone for interior use. Analysis of conglomerate can sometimes be used as a prospecting tool. For example, most diamond deposits are hosted in kimberlite. If a conglomerate contains clasts of kimberlite, then the source of that kimberlite must be somewhere upstream.