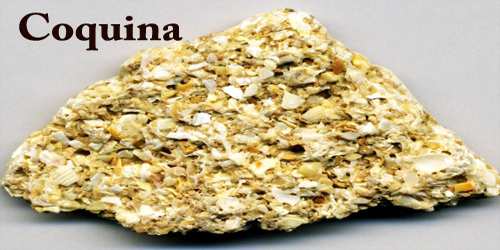 Coquina (/koʊˈkiːnə/) is a sedimentary rock composed almost entirely of sand-size fossil debris. The fossils are usually mollusk or gastropod shells and shell fragments. Brachiopod, trilobite, coral, ostracod, and other invertebrate shell debris is present in many coquinas. The fossil debris of coquina is composed of calcium carbonate, making coquina a variety of limestone. The term coquina comes from the Spanish word for “cockle” and “shellfish”.

A soft type of limestone, coquina is porous and light-colored. For sediment to be considered to be coquina, the particles composing it should average 2 mm (0.079 in) or greater in size. Coquina can vary in hardness from poorly to moderately cemented. Incompletely consolidated and poorly-cemented coquinas are considered grainstones in the Dunham classification system for carbonate sedimentary rocks. Well-cemented coquina is classified as a biosparite (fossiliferous limestone) according to the Folk classification of sedimentary rocks.

Coquinas accumulate in high-energy marine and lacustrine environments where currents and waves result in the vigorous winnowing, abrasion, fracturing, and sorting of the shells that compose them. As a result, they typically exhibit well-developed bedding or cross-bedding, close packing, and good orientation of the shell fragments. The high-energy marine or lacustrine environments associated with coquinas include beaches, shallow submarine raised banks, swift tidal channels, and barrier bars.

Coquina contains very little silt or clay-size particles, and its fossil fragments are lightly cemented together. This makes it an extremely porous rock that can serve as an aquifer for community and private water supplies. It can also serve as a reservoir for oil and natural gas. Coquina is sometimes used as a construction material, but only where other materials of greater physical strength and durability are not available.

Coquina is mainly composed of the mineral calcite, often including some phosphate, in the form of seashells or coral. Coquinas dating from the Devonian period through to the much more recent Pleistocene are a common find all over the world, with the depositional requirements to form coquina being a common thing in many marine facies.

On the basis of grain size and matrix characteristics, three types of sedimentary rocks related to coquina can be distinguished: coquinite, microcoquina, and coquinoid limestone. These are summarized in the accompanying classification chart and in the descriptions below: 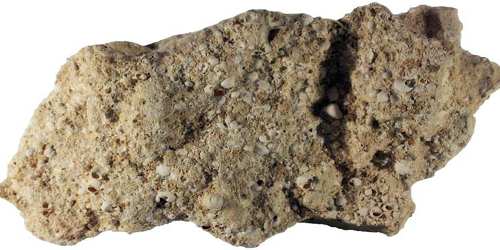 Most coquina-forming sediments are found in tropical or subtropical marine waters because that is where an abundant supply of fossil debris is most likely to be produced. They usually form along ocean beaches, barrier islands, shallow offshore bars, or tidal channels. In these depositional environments, the rock unit may develop sedimentary structures that include: bedding, cross-bedding, ripple marks, etc. A few coquina deposits are known from freshwater environments that include lakeshores and river channels.

Coquina has a very limited distribution in southeastern North Carolina. The best-known outcrop is located in New Hanover County, near Fort Fisher, along the southern tip of North Carolina’s coast. It is one of the few naturally occurring outcrops in the coastal plain region of North Carolina, described as “a low-relief plain underlain by beds of shallow-marine, estuarine, shoreline, and fluvial sediments” in The Geology of the Carolinas. These sediments were deposited during numerous episodes of sea-level rise and fall over hundreds of thousands of years. The coastlines of the Tidewater region of North Carolina change constantly in response to wind and wave action, sedimentary deposition, tidal movements, and changes in sea level. Although the inner coastal plain is considered to be more stable, the coastal plain was inundated by repeated marine transgressions due to fluctuating sea levels during the late Pliocene and early Pleistocene

Coquina also occurs along the coasts of Australia, Brazil, Mexico, and the United Kingdom. Significant deposits of coquina are found along the coasts of Florida. The formation and associated sand form part of the Atlantic Coastal Ridge, a Pleistocene barrier island chain that extends from Duval County to Dade County. Other coquina deposits are found in the state, but only in limited areas. The Anastasia Formation is naturally exposed in a number of places along the east coast including Washington Oaks Gardens State Park, Gilbert’s Bar House of Refuge, Hutchinson Island in Martin County, and Blowing Rocks Preserve, owned by The Nature Conservancy, in Martin County.

After deposition, calcium carbonate usually precipitates within the sediment. This can be in the form of cement that binds the fossil debris together. This “cementation” is the essential step that transforms sediment into sedimentary rock.

The ancient Maya built their city of Toniná in the highlands of what is now Chiapas in southern Mexico using native rocks to construct its masonry buildings, among them large coquina flagstones from which they made blocks and bricks for floors, walls, and stairways. Still occasionally quarried or mined, and used as a building stone in Florida for over 400 years, coquina forms the walls of the Castillo in St. Augustine. The stone made very good material for building forts, particularly those built during the period of heavy cannon use. Because of coquina’s softness, cannonballs would sink into, rather than shatter or puncture the walls. The first Saint Augustine lighthouse, built by the Spanish, was also made of coquina.

Coquina has several uses. As a subsurface rock unit with high porosity and permeability, coquina can serve as a groundwater aquifer or as a reservoir rock for oil and natural gas. These are the most significant economic uses of coquina. As a construction material, coquina usually does not meet durability specifications. The rock has a high porosity, and the grains are poorly cemented together. That gives it a low compressive strength and a low abrasion resistance. These usually disqualify coquina for use as a building stone and as a construction aggregate.

In the past coquina was used for the construction of buildings in Denham, Western Australia, but quarrying is no longer permitted in the World Heritage Site. When first quarried, coquina is extremely soft. This softness makes it very easy to remove from the quarry and cut into shape. However, the stone is also at first much too soft to be used for building. In order to be used as a building material, the stone is left out to dry for approximately one to three years, which causes the stone to harden into a usable, but still comparatively soft, form.

One interesting exception to this is in the performance of the coquina used to construct Castillo de San Marcos, a Spanish Fort built-in 1672 on the western shore of Matanzas Bay at St. Augustine, Florida. When English ships attempted to take the fort by siege in 1702, their cannonballs embedded themselves into the thick blocks of coquina instead of breaking them in a shower of deadly fragments. This property of the coquina enabled the fort to resist the attack of 1702, another attack in 1740, and the star-shaped fort still stands today.

Coquina has also been used as a source of paving material. It is usually poorly cemented and easily breaks into a component shell or coral fragments, which can be substituted for gravel or crushed harder rocks. In the 1930s, large-scale mining of coquina for use in highway construction began at Fort Fisher in North Carolina. Large pieces of coquina of unusual shapes are sometimes used as landscape decoration. Because coquina often includes a component of phosphate, it is sometimes mined for use as fertilizer.