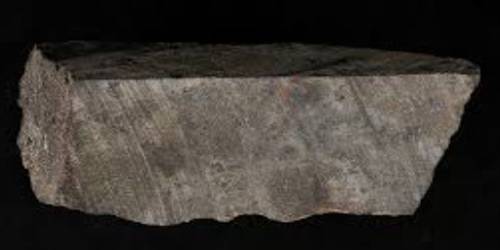 Coyoteite is a hydrated sodium iron sulfide mineral. It is a triclinic black mineral containing hydrogen, iron, oxygen, sodium, and sulfur. It is moderately magnetic. The mineral was named coyoteite after Coyote Peak near Orick, California where it was discovered (along with another rare mineral, orickite).

This mineral is unstable under normal atmospheric conditions, making it rare at the surface. The mineral was first described in a petrographic study of a sample of a mafic diatreme at Coyote Peak. Coyoteite is black in color and is streaked with opaque metallic luster in fragmental samples. The measured density is 2.5 to 2.6 g/cm3 and the calculated one is 2.879 g/cm3. On the polished thin section, coyoteite is pale brownish to gray, with a pink tint. It shows low pleochroism, from gray to pink. In reverse, it shows large optical anisotropy, from gray to dull golden orange.

The largest piece of coyoteite found on that specimen has the dimensions of 0.2 × 0.4 mm.

Coyoteite has been found only in the mafic alkalic diatreme at the Coyote Peak near Orick, Humboldt County, California, US. It is formed in pegmatitic clots associated with some rare iron sulfide minerals, such as erudite, bartonite, and djerfisherite, as well as with common minerals pyrrhotite and magnetite.