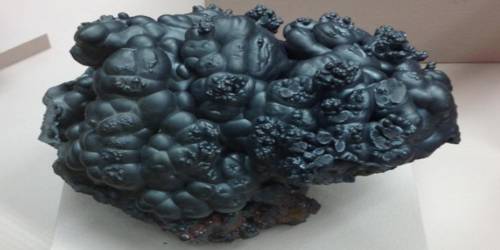 Cryptomelane is a potassium manganese oxide mineral with formula K(Mn4+, Mn2+)8O16. It is a mineral consisting of an oxide of manganese and potassium, probably KMn8O16.H2O, common in manganese ores. Cryptomelane was approved in 1982 by the International Mineralogical Association (IMA).

Cryptomelane was identified and defined based on X-ray diffraction studies of samples from Tombstone, Arizona; Deming, New Mexico; Mena, Arkansas; and Philipsburg, Montana. The name comes from the Greek for hidden and black, in reference to the confusion and difficulty in recognition of the various black manganese oxide minerals referred to as psilomelane, the collective term for hard manganese oxides. Widespread in oxidized manganese deposits as open-space fillings or replacing primary manganese-bearing minerals; commonly replaced by other secondary manganese minerals. The type locality is the Tombstone District, Cochise County, Arizona, US. It is of rather a common occurrence in oxidized manganese deposits where it occurs as replacements and open space fillings in veins and vugs. It occurs in association with pyrolusite, nsutite, braunite, chalcophanite, manganite and various other manganese oxides.