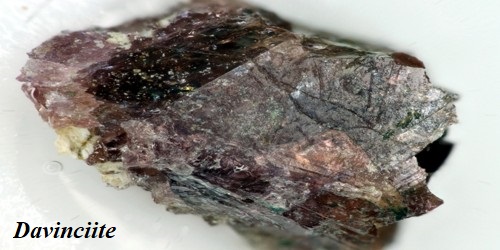 Davinciite is a very rare mineral of the eudialyte group, with the simplified formula Na12K3Ca6Fe32+Zr3(Si2O73OH)Cl2. The formula given does not show the presence of cyclic silicate groups. The type material of davinciite is deposited in the Fersman Mineralogical Museum, Russian Academy of Sciences, Moscow. Davinciite is dark lavender and transparent, with a vitreous luster and white streak. The new mineral is brittle, with a conchoidal fracture; the Mohs’ hardness is 5. No indications of cleavage or parting were observed. The measured density is 2.82(2) g/cm3 (volumetric method); the calculated density is 2.848 g/cm3.