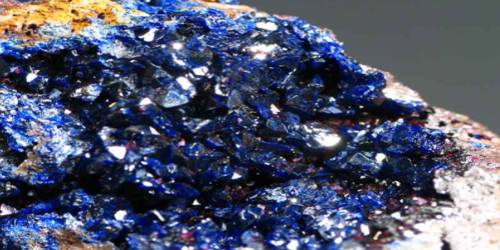 Delafossite is a copper iron oxide mineral with formula CuFeO2 or Cu1+Fe3+O2. It is a mineral consisting of an oxide of copper and iron formerly found in quantity at Bisbee, Arizona, and in small amounts elsewhere. It is usually a secondary mineral that crystallizes in association with oxidized copper and is rarely a primary mineral.

It was first noted by Charles Friedel in 1873 and given the composition Cu2O·Fe2O3. The mineral was given the name delafossite in honor of the French mineralogist and crystallographer Gabriel Delafosse (1796–1878). Delafossite is a member of the delafossite mineral group with a general formula ABO2, a group characterized by a sheet of linearly coordinated A cations stacked between edge-shared octahedral layers (BO6). Delafossite along with other minerals of the ABO2 group has been recognized for its electrical properties from insulation to metallic conduction.

Occurrence: Principally as a secondary mineral near the base of the oxidized zone of copper deposits; less commonly a primary mineral.

In 1873, It was discovered by Charles Friedel in a region of Ekaterinburg, Siberia. Since its discovery, it has been identified as a fairly common mineral found in such places as the copper mines in Bisbee, Arizona. Delafossite is usually a secondary mineral often found in oxidized areas of copper deposits although it can be a primary mineral as well. Delafossite can be found as massive, relatively distinct crystals on hematite. Delafossite has since been found in mines around the world from Germany to Chile.