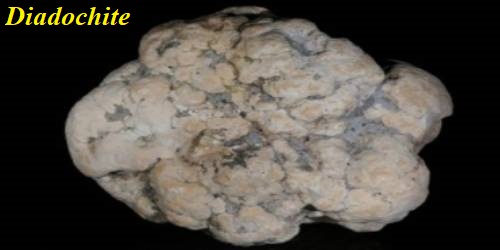 Diadochite is a phospho-sulfate mineral. It is a phosphosulfate mineral with a greenish-yellow to brown color. It is a secondary mineral formed by the weathering and hydration of other minerals. Its formula is Fe2(PO4)(SO4)OH·5H2O. It is a mineral consisting of a basic hydrous ferric phosphate and sulfate that is brown or yellowish in color.

Identified originally in Belgium in 1831, it has been found in many places throughout the world. It was named after its formation as a secondary mineral from earlier phosphates after the Greek word diadochos, meaning “successor.” Diadochite is an uncommon mineral that may be post-mine in origin and can be found in gossans and coal deposits formed from sulfate-rich solutions, as well as in caves with the phosphate derived from guano, and in granite pegmatites. It has a greenish yellow to brown color and forms nodules or crusts. Its appearance has been compared to cauliflower.

Localities for Diadochite include in Germany, Belgium, the Czech Republic, France, Slovakia, Austria, Canada, and in the USA including here in the Black Hills of South Dakota in the Tip Top and Big Chief mines. Other additional localities are known.