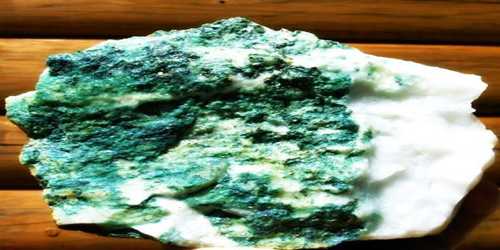 Mariposite is beneficial and strong stone; it is a mineral which is a chromium-rich variety of mica, which imparts an attractive green color to the generally white dolomitic marble in which it is commonly found. It was named for Mariposa, California, though it can be found in several places in the Sierra Nevada mountains. It is also found in a few locations in Newfoundland, Canada, where it is called virginite, and in Europe. The chemical formula of mariposite is K(Al,Cr)2(Al,Si)4O10(OH)2.

Mariposite is not an officially classified mineral, but is a chromium-rich phengite, which is a high silica variety of muscovite. It is the chromium that gives it its distinctive green color. The energies that it possesses can be significantly improved most especially when paired with other crystals and stones like Dicinite, Tourmilinated Quartz, Petoskey, Andalusite, Red Catlinite, Halite, Tibetan Quartz, and Petrified Quartz.

The name originates from the community of Mariposa, California. Green mica and green rocks that derive their color from green mica are seen in a few spectacular outcrops in that area. During the California Gold Rush, many prospectors learned that mariposite rocks were often sources of gold. Looking for green and white rocks became a prospecting method that sometimes resulted in success.

The term “mariposite” also refers to the stone in which the green mica is found. This stone is metamorphic rock, containing varying amounts of dolomite and quartz. Larger proportions of quartz give it a more attractive, translucent appearance. It is used as a decorative construction material, in walls, monuments, and bridges. It is also made into jewelry. 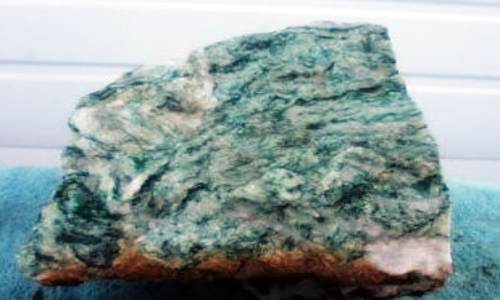 Sources and Properties of Mariposite –

Mariposite is very similar to Fuchsite which is also a chromium-rich variety of Muscovite. Neither Mariposite or Fuchsite is valid minerals, just varieties of Muscovite. Mariposite is colored a distinctive green by the presence of chromium and is often found mixed with white dolomitic marble and Quartz. This combination of deep green and bright white makes for an attractive cabochon (see picture above). Mariposite was named for Mariposa County, California, USA, where it was originally found, though it can be found in several locations in the Sierra Nevada Mountains of California. It has also been found in a few locations in Newfoundland, Canada, where it is locally called Virginite. Mindat.org lists numerous mariposite localities in the United States (Alaska, Arizona, California, Colorado, Nevada, Tennessee, Utah, and Washington), Austria, Canada, China, France, Ireland, Japan, Papua New Guinea, Spain, Sweden, and Venezuela.

The name “mariposite” has appeared in the geological literature since the late 1800s. “Mariposite” is not the name of a formally recognized mineral. Instead, it is an informal name that has been widely used for various types of mica with a green color. Green micas are often called “mariposite,” which implies that an identification has been made. It would probably be better to simply call the material “green mica.”

Clearly, the name “mariposite” has been used many ways. This lack of consistent use probably contributes to “mariposite” being called a “discredited name” in the Glossary of Geology, Fifth Edition, published by the American Geosciences Institute.

Mariposite, on the other hand, comes with many powerful energies. For example, its emotional healing energies will motivate to be more confident most especially with the decisions that you’re making. Whereas the supportive energies will definitely remind you that it is only a bad time and not a ruthless life.

Uses and Benefits of Mariposite –

Mariposite is most important for being an ore of gold and a source of placer gold. It has been cut as a dimension stone to produce cemetery markers, fireplaces, facing stone and other architectural works. It is a material that can be used where strength and weather resistance are not required. Much mariposite will weather to a muddy brown color that can disappoint people who use it for an exterior project. It is sometimes used to produce crushed stone.

Mariposite is also said to help cope with energy overload, and avoid or eliminate exhaustion. It is also a stone of creative self-expression.

Mariposite has many lapidary uses. It is used to make attractive cabochons, spheres, paperweights, bookends, and tumbled stones. Anyone who uses mariposite in lapidary projects must be mindful that the rock is composed of several minerals which may have incompetent boundaries, different hardnesses, and polish to different degrees of luster. The best specimens for lapidary use are solid pieces made up mostly of quartz, without any signs of weathering.

This stone may also carry guidance and inspiration from the spiritual realm when combined with the October birthstone.