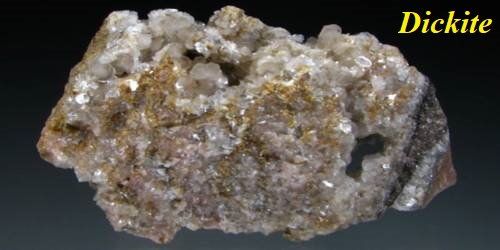 Dickite occurs with other clays and requires x-ray diffraction for its positive identification. Dickite is an important alteration indicator in hydrothermal systems as well as occurring in soils and shales. Dickite has perfect cleavage in the (001) direction. Its color varies from blue, gray, white to colorless. It usually has a dull clay-like texture. Its hardness on the Mohs scale is 1.5-2, basically between talc and gypsum. This is attributed to its loose chemical bonds. It is held with hydrogen bonds, which are otherwise weak. It leaves a white streak and it has a pearly luster. It has a density of 2.6.

Dickite was first discovered in Amlwch, Island of Anglesey, Wales, UK. Dickite has scattered across Wales forming occurrences in vein assemblages and as a rock-forming mineral. This area and others where dickite can be found all share similar characteristics. Another occurrence spot, as indicated by Brindley and Porter of the American Mineralogists journal, is the Northerly dickite-bearing zone in Jamaica.