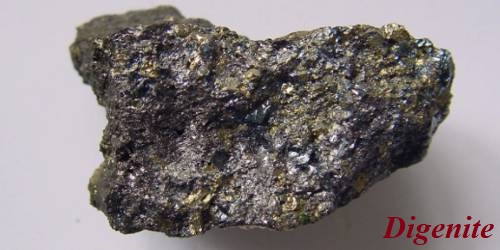 Digenite is a copper sulfide mineral with formula: Cu9S5. It is an important ore of copper, although it is not very well known even by mineral collectors. It is found in copper sulfide deposits of both primary and supergene occurrences.

It was first described in 1844 from the type locality of Sangerhausen, Saxony-Anhalt, Germany. The name is from the Greek digenus meaning of two origins in reference to its close resemblance with chalcocite and covellite. Digenite is a black to a dark blue opaque mineral that crystallizes with a trigonal – hexagonal scalenohedral structure. In habit, it is usually massive but does often show pseudo-cubic forms. It has poor to indistinct cleavage and a brittle fracture. It has a Mohs hardness of 2.5 to 3 and a specific gravity of 5.6.

Digenite occurs in the transitional zone of supergene oxidation of primary sulfide ore deposits, at the interface between the upper and lower saprolite ore zones. It is rarely an important mineral for copper ores, as it is more usually replaced by chalcocite further up in the weathering profile, and is a minor weathering product of primary chalcopyrite.

It is typically associated with and often intergrown with chalcocite, covellite, djurleite, bornite, chalcopyrite, and pyrite. The type locality is Sangerhausen, Thuringia, Germany, in copper slate deposits.