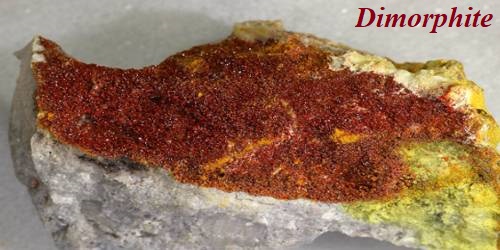 Dimorphite, chemical name tetraarsenic trisulfide (As4S3), is a very rare orange-yellow arsenic sulfide mineral. It is an orthorhombic-dipyramidal orange mineral containing arsenic and sulfur. In nature, dimorphite forms primarily by deposition in volcanic fumaroles at temperatures of 70–80°C (158–176°F). Dimorphite was first discovered in such a fumarole near Naples, Italy in 1849 by the mineralogist Arcangelo Scacchi (1810–1893).

Dimorphite can be synthesized by melting arsenic and sulfur together in the proper molar ratios in the vacuum. Initial research indicates the possibility of using synthetic dimorphite in the development of gas sensors, due to the semiconductive properties of dimorphite. Occurrence: Deposited at a fumerolic vent at temperatures of about 700C–800C (Solfatara, Italy); formed in an ore deposit under secondary conditions (Chile).

Since its discovery, dimorphite has been found in the Alacrán silver mine near Copiapó, Chile. It has also been reported from Cerro de Pasco, Peru, and the Lavrion District Mines in Attica, Greece.