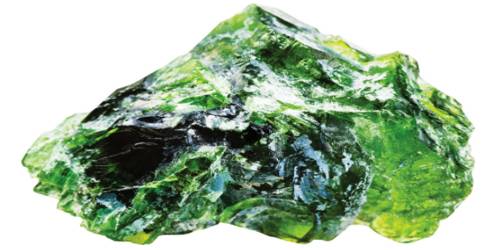 Diopside is the mineral derives its name from the Greek words dis and opse, which mean twice and face, in reference to the two ways of orienting the vertical prism. It is a monoclinic pyroxene mineral with composition MgCaSi2O6. It forms complete solid solution series with hedenbergite (FeCaSi2O6) and augite and partial solid solutions with orthopyroxene and pigeonite. It is an important mineral in the Earth’s mantle and is common in peridotite xenoliths erupted in kimberlite and alkali basalt. It forms variably colored, but typically dull green crystals in the monoclinic prismatic class. It has two distinct prismatic cleavages at 87 and 93° typical of the pyroxene series. It has a Mohs hardness of 6, a Vickers hardness of 7.7 GPa at a load of 0.98 N, and a specific gravity of 3.25 to 3.55.

Occurrences are reported in Canada, South Africa, Russia, Brazil, and a wide variety of other locations. It occurs in metamorphosed siliceous Ca, Mg-rich rocks of the pyroxene-hornfels, or epidote-amphibolite facies, skarns, Ca, Mg-rich gneisses and schists, and some kimberlites and peridotites. It is less common in andesites and alkalic olivine basalts.

Diopside is found in ultramafic (kimberlite and peridotite) igneous rocks, and diopside-rich augite is common in mafic rocks, such as olivine basalt and andesite. Diopside is also found in a variety of metamorphic rocks, such as in contact metamorphosed skarns developed from high silica dolomites.