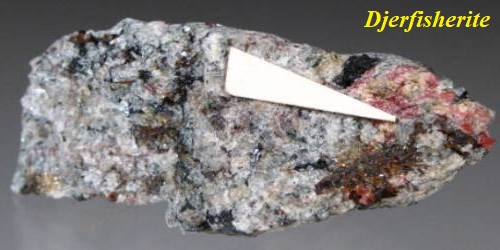 Djerfisherite is an alkali copper–iron sulfide mineral and a member of the djerfisherite group. It is an isometric-hexoctahedral mineral containing chlorine, copper, iron, nickel, potassium, sodium, and sulfur. It has the chemical formula K6Na(Fe2+, Cu, Ni)25S26Cl. Its type locality is the Kota-Kota meteorite (Marimba meteorite), Malawi. It was first described in 1966 and named after Professor Daniel Jerome Fisher (1896–1988), University of Chicago. It forms crystals generally less than 100 μm in size and occurs as irregular single-phase grains or it fills fissures of the silicate matrix and infiltrates phlogopite along its cleavage planes.

It most commonly occurs in irregular patches of sulfide composed mainly of pyrrhotite accompanied by minor chalcopyrite and rare galena, in a matrix of Ti-bearing andradite, clinopyroxene, phlogopite, plagioclase, apatite and rare zircon, titanite, and pyrophanite.