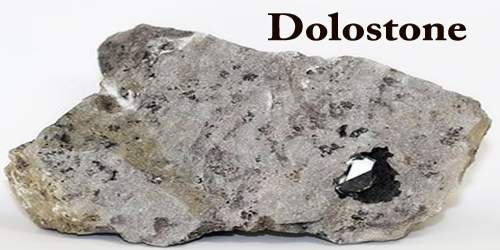 Dolostone (also known as dolomite, dolomite rock or dolomitic rock) is a carbonate sedimentary rock of which more than 50% by weight or by areal percentages under the microscope consists of the mineral dolomite. It is a type of limestone, the carbonate fraction of which is dominated by the mineral dolomite, calcium magnesium carbonate (CaMg(CO3)2). Dolostone has a stoichiometric ratio of nearly equal amounts of magnesium and calcium. Most dolostone formed as a magnesium replacement of limestone or lime mud before lithification. Dolostone is resistant to erosion and can either contain bedded layers or be unbedded. It is less soluble than limestone in weakly acidic groundwater, but it can still develop solution features (karst) over time. Dolostone can act as an oil and natural gas reservoir.

Dolomite is rarely found in modern sedimentary environments, but dolostones are very common in the rock record. They can be geographically extensive and hundreds to thousands of feet thick. Most rocks that are rich in dolomite were originally deposited as calcium carbonate muds that were postdepositionally altered by magnesium-rich pore water to form dolomite.

It is also a common mineral in hydrothermal veins. There it is often associated with barite, fluorite, pyrite, chalcopyrite, galena, or sphalerite. In these veins it often occurs as rhombohedral crystals which sometimes have curved faces. The “dolomite problem” refers to the vast worldwide depositions of dolomite in the past geologic record eluding a unified explanation for their formation. The first geologist to distinguish dolostone from limestone was Belsazar Hacquet in 1778. 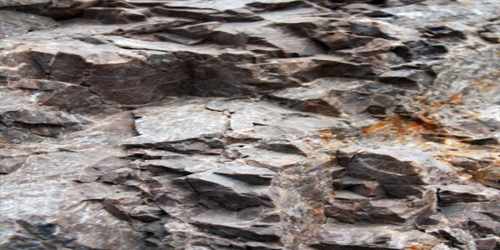 As with limestone caves, natural caves and solution tubes typically form in dolostone as a result of the dissolution by weak carbonic acid. Caves can also, less commonly, form through dissolution of rock by sulfuric acid. Calcium carbonate speleothems (secondary deposits) in the forms of stalactites, stalagmites, flowstone, etc., can also form in caves within dolostone. “Dolomite is a common rock type, but a relatively uncommon mineral in speleothems”. Both the ‘Union Internationale de Spéléologie’ (UIS) and the American ‘National Speleological Society’ (NSS), extensively used in their publications, the terms “dolomite” or “dolomite rock” when referring to the natural bedrock containing a high percentage of CaMg(CO3)2 in which natural caves or solution tubes have formed.

Dolostones have been metamorphosed to both dolomite and calcite marbles; dedolomitization processes account for the latter. Some dolomite marbles are nearly pure dolomite. Dolomite carbonatites are of the same general origin as calcite carbonatites. The dolomite present in dolomite veins has also been ascribed diverse origins; some appears to have been deposited by percolating connate or meteoric groundwater, and some seems more likely to have been deposited by hydrothermal solutions charged with magmatic volatiles.

Dolomite speleothems – Both calcium and magnesium go into solution when dolomite rock is dissolved. The speleothem precipitation sequence is: calcite, Mg-calcite, aragonite, huntite, and hydromagnesite. Hence, the most common speleothem (secondary deposit) in caves within dolomite rock karst, is calcium carbonate in the most stable polymorph form of calcite. Speleothem types known to have a dolomite constituent include: coatings, crusts, moon milk, flowstone, coralloids, powder, spar, and rafts. Although there are reports of dolomite speleothems known to exist in a number of cave around the world, they are usually in relatively small quantities and form in very fine-grained deposits.

Dolostone is often used instead of limestone as an aggregate for both cement and bitumen mixes and also as a flux in blast furnaces. The use of dolostone as a flux has increased, especially since environmental contamination has become a widely heeded consideration because the resulting slag can be employed for such things as lightweight aggregate, whereas that formed when limestone is used cannot. Such is the case because dolostone-based slag does not slake (disintegrate in water), but limestone-based slag does.