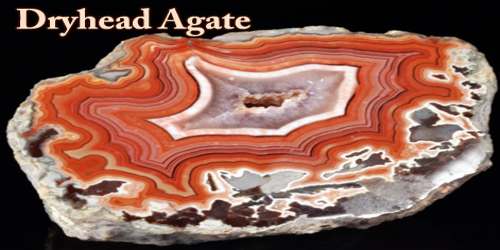 Dryhead Agate is one of the most beautiful agates found anywhere. It is found in southern Montana between the Big Horn and Pryor Mountain ranges and just to the west of the Big Horn River. In this area, oval-shaped agate nodules are found as float in the soil and in stream sediments. People believe that the Dryhead Agate is one of the best materials available from the United States.  The quality of the agates varied widely, with many of the nodules filled with calcite and very little quality agate.  Good nodules, however, offer the basic red and orange colors, with gold, white, yellow and pink.

The Dryhead Agates were named after many bison skulls found near the site. That was where the Native Americans were said to run the bisons over the cliff, killing many of them, and then arranging the bison skulls in ceremonial manner. The agates come in form of dark colored concretion nodules found in the shale (mudstone) bed, and because of overlaying hard limestone bed, it takes some hard digging to obtain the nodules and only a small percentage of the nodules was said to be of any good. It used to be a fee collecting site in 1970s, and there had been changes in the ownership of the site. There was some mining activities using the heavy machines. Currently, it appears that the owners of the area is not interested in allowing anyone to dig for the agates. There are several other deposits including one in-sited in a Native American Reserve so any diggings are not permitted there.

The typical color of the Dryhead agates are brownish orange, but they can also come in the yellow, red, pink, gray, lavender and white colors. The color combo of orange, red, pink and white is the most desirable. It’s typical for the Dryhead agates to contain interlaying of quartz and agate which apparently supports a concept that the agates may have been formed by successive layering in respect to the wet and dry seasons. The Dryhead agates have an interesting form of fluorescence. The quartz bands of the orange Dryhead agates (without pink/white cores) strongly fluoresce green, hence, the glowing neon green “contour lines” against dark non-fluorescing bands under ultraviolet light.

Sources and Properties of Dryhead Agate – 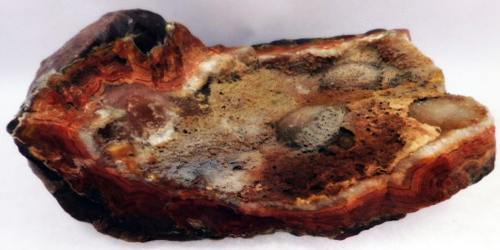 The deposit was originally explored in the 1950’s, as access to the area began to improve. Float material was traced back to the original source, which led to initiation of mining activity. Mining was available to the public for a few years as a fee area, but that option was closed in the early 1980’s. Mining continued under several groups until the late 1990’s, when the agreement with the landowner ended. Contrary to many published reports, the primary mining area has not been turned into a Wild Horse Range. Past claim owners contend that the cost of mining in the remote location exceeds the value of the production. It would be great if someone would renegotiate a contract to resume mining, as Dryhead Agates produce outstanding specimen nodules and cut cabochons.

Areas, where the best agates are known to occur, were mined by individuals during the 1950s, 1960s, and 1970s. In the 1980s, some areas were open to collectors on a fee mining basis. Today, very little new Dryhead Agate enters the lapidary market. What is currently being sold is mostly from old stocks.

Agate ranks high (7/8) on the Moh’s 1-10 hardness scale and will last for generations. It may be for this reason that many people believe agate has special properties that promote strength and healing while keeping the wearer safe.