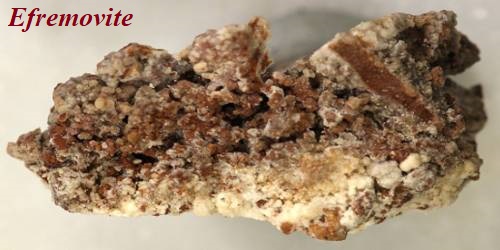 Efremovite is a rare ammonium sulfate mineral with the chemical formula: (NH4)2Mg2(SO4)3. It is an isometric-tetartoidal mineral containing hydrogen, magnesium, nitrogen, oxygen, and sulfur. It was first described in 1989 for an occurrence in the Chelyabinsk coal basin, Southern Urals, Russia. It was named after Russian geologist Ivan Antonovich Yefremov (1907–1972). It is a white to gray cubic mineral. This anhydrous sulfate occurs as a constituent in sulfate crusts of burning coal dumps. It is hygroscopic and when exposed to humid air it slowly converts to the hydrate form, boussingaultite.

It occurs in the Chelyabinsk coal basin, Southern Urals, Russia. It has also been reported from several coal mining areas across Europe. It occurs in association with native sulfur, kladnoite (it), mascagnite, and boussingaultite.