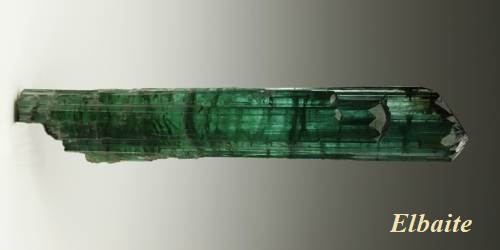 Elbaite, a sodium, lithium, aluminum boro-silicate, with the chemical composition Na(Li1.5Al1.5)Al6Si6O18(BO3)3(OH)4, is a mineral species belonging to the six-member ring cyclosilicate tourmaline group. It is the most colorful member of this group. It is named after the island of Elba, Italy. Elbaite forms three series, with dravite, liddicoatite, and schorl.

Elbaite forms three series, with dravite, with fluor-liddicoatite, and with schorl. Due to these series, specimens with the ideal endmember formula are not found occurring naturally. It is strongly pleochroic which means that a transparent crystal will appear darker when viewed down the long axis of the crystal. A green or blue Elbaite can appear black when viewed from such an angle. Microscopic acicular inclusions in some elbaite crystals show the Cat’s eye effect in polished cabochons. As a gemstone, elbaite is a desirable member of the tourmaline group because of the variety and depth of its colors and quality of the crystals. Originally discovered on the island of Elba, Italy in 1913, it has since been found in many parts of the world. In 1994, a major locality was discovered in Canada, at O’Grady Lakes in the Yukon.

Elbaite forms in igneous and metamorphic rocks and veins in association with lepidolite, microcline, and spodumene in granite pegmatites; with andalusite and biotite in schist; and with molybdenite and cassiterite in massive hydrothermal replacement deposits.