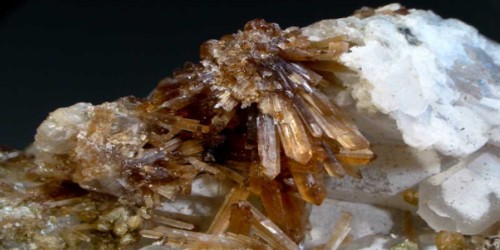 Eosphorite is a brown (occasionally pink) manganese hydrous phosphate mineral with chemical formula: MnAl(PO4)(OH)2·H2O. It is used as a gemstone. It is an orthorhombic-dipyramidal mineral containing aluminum, hydrogen, manganese, oxygen, and phosphorus. It is an attractive transparent pinkish orange crystal has been faceted. It forms from the alteration of primary granitic phosphates such as lithiophilite and triphylite when aluminum and water are available.

It was first described in 1878 for an occurrence in the Branchville Mica Mine in Branchville, Fairfield County, Connecticut, US. Its name is derived from the Greek έωσφορος for “dawn-bearing,” because of its pink color. Eosphorite forms yellowish brown, pink and sometimes colorless crystals. The crystals are monoclinic, but often show pseudo-orthorhombic forms due to twinning. The two endmembers are isostructural but differ in their properties, such as crystal habit, coloration, and optical properties.