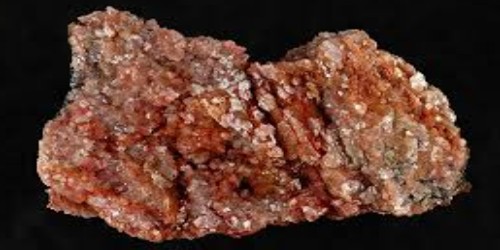 Ephesite is a rare member of the mica silicate mineral group, phyllosilicate. It is a monoclinic-prismatic mineral containing aluminum, hydrogen, lithium, oxygen, silicon, and sodium. Many times ephesite will be referred to as a soda-margarite for this substitution of sodium. Because of these findings the names ephesite, lesleyite, soda-maragrite and potash-margarite have been used synonymously.

It is restricted to quartz-free, alumina rich mineral assemblages and has been found in South African deposits in the Postmasburg district as well as Ephesus, Turkey. Ephesite found in its natural state is translucent and pink in color. It has a vitreous luster and pearly on the cleavages. As a group the micas are characterized by their perfect basal cleavage, giving thin, flexible, and elastic cleavage plates. Crystals are usually tabular with prominent basal planes and hexagonal in outline.

The history of the study of the mineral ephesite begins with its first appearance in Ephesus, Asia Minor at Gumach Dagh in a deposit also associated with emery discovered by J. Lawrence Smith in 1851. I. Lea in 1867 had discovered a mineral of the same composition which he had been calling under a different name, lesleyite. Later, ephesite was closely compared to a mineral margarite which shared the same composition as ephesite with a substituted Ca for Na. Derivation of the name ephesite comes from its place of occurrence, Ephesus.