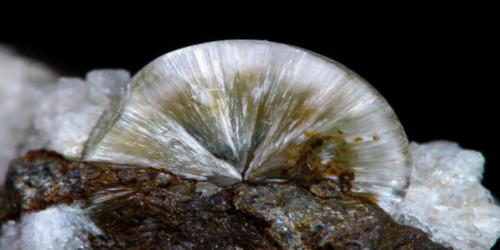 Erionite is a naturally occurring fibrous mineral that belongs to a group of minerals called zeolites. It is one of the rarer zeolites, a popular group of minerals to collect. The chemical composition of erionite is approximately represented by the formula (Na2, K2, Ca)2Al4Si14O36·15H2O. It can be differentiated into Erionite-Na, Erionite-K, and Erionite-Ca forms based on the most dominant component.

It was first described by A.S. Eakle in 1898, as white woolly fibrous masses in cavities in rhyolite lava near Durkee, Oregon. It usually is found in volcanic ash that has been altered by weathering and ground water. Erionite absorbs up to 20% of its weight in water, has a specific gravity of 2.02 to 2.13, and has gas absorption, ion exchange, and catalytic properties that are highly selective and depend on the molecular size of the absorbed compounds. Zeolites, in general, have good thermal stability, rehydration kinetics, and water vapor adsorption capacity.

Deposits of fibrous erionite are located in Arizona, Nevada, Oregon, and Utah. These zeolite beds may be up to 15 ft (4.6 m) thick and may lie in surface outcroppings. Erionite fibers have been detected in samples of road dust in Nevada and U.S. residents of the Intermountain West may be potentially exposed to fibrous erionite in ambient air. Erionite has also been identified in samples from the Tertiary Arikaree Formation in southeast Montana and northwest South Dakota.