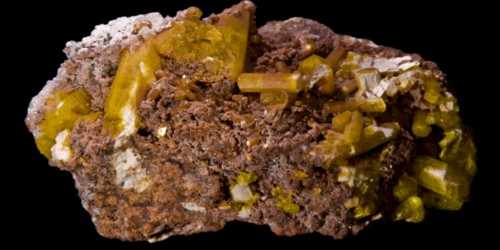 Ettringite is either colorless or white in color. It is transparent in appearance and non-magnetic. The mineral is non-fluorescent with the white streak, perfect cleavage, and vitreous luster. It forms needle-like crystals. The hardness of ettringite ranges from 2 to 2.5, and its density is 1.8 g/cm3.

Ettringite occurs in xenoliths or metamorphosed limestone near igneous contacts. It also occurs as weathering crusts on larnite rocks.

It was first described in 1874 by J.Lehmann, for an occurrence near the Ettringer Bellerberg volcano, Ettringen, Rheinland-Pfalz, Germany. It occurs within metamorphically altered limestone adjacent to igneous intrusive rocks or within xenoliths. It also occurs as weathering crusts on larnite in the Hatrurim Formation of Israel.