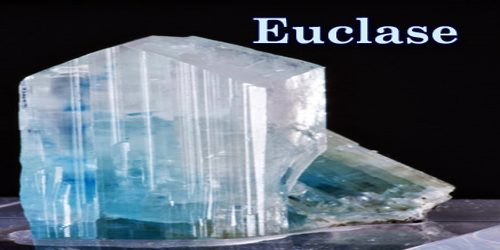 Euclase is a beryllium aluminium hydroxide silicate mineral (BeAlSiO4(OH)), that crystallizes in the monoclinic system and is typically massive to fibrous as well as in slender prismatic crystals. It is related to beryl (Be3Al2Si6O18) and other beryllium minerals. It is a product of the decomposition of beryl in pegmatites. Euclase crystals are usually found in granitic pegmatites and low-temperature hydrothermal deposits. Massive to fibrous euclase is usually found in schists and phyllites.

Euclase is safe to say that most geologists have never knowingly encountered euclase in the field. It is a rare mineral, they are not expecting to see it, it is usually present in small quantities, and because most euclase is colorless to white it is easily overlooked.

The name Euclase is from the Greek words: eu, meaning well, and klasis, meaning breaking. The word breaking comes from Euclase’s easy cleavage. It has a tendency to chip easily, which is why special care must be taken when polishing or cutting the stone. The first examples of Euclase discovery were in 1785 in South America.

Euclase crystals are noted for their blue color, ranging from very pale to dark blue. The mineral may also be colorless, white, or light green. Cleavage is perfect, parallel to the clinopinacoid, and this suggested to René Just Haüy the name euclase, from the Greek εὖ, easily, and κλάσις, fracture. The ready cleavage renders the crystals fragile with a tendency to chip, and thus detracts from its use for personal ornament. When cut it resembles certain kinds of beryl and topaz, from which it may be distinguished by its specific gravity (3.1). Its hardness (7.5) is similar to beryl (7.5 – 8), and a bit less than that of topaz (8).

The energy of Euclase helps to transform negative thought patterns into positive ones, it assists in clearing and healing our energy fields and our environment. This stone aligns our physical and emotional energy fields to our soul.

​Euclase connects to the heart, throat and third eye chakras. It allows us to understand and “see” the truth in all situations, to act with heart-centred awareness and communicate and speak your truth with clarity and honesty.

Occurrences and Properties of Euclase –

Euclase was first reported in 1792 from the Orenburg district in the southern Urals, Russia, where it is found with topaz and chrysoberyl in the gold-bearing gravels of the Sanarka (nowadays probably, Sakmara River, Mednogorsk district, Orenburgskaya Oblast’). Its type locality is Ouro Prêto, Minas Gerais, Southeast Region, Brazil, where it occurs with topaz. It is found rarely in the mica-schist of the Rauris in the Austrian Alps. Noteworthy euclase occurrences include: Australia, Austria, China, Colombia, Colorado (USA), Germany, Russia, and Zimbabwe. 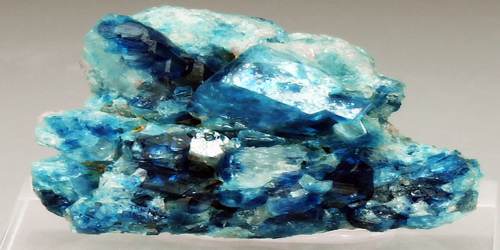 Highly transparent, blue and aquamarine-colored Euclase crystals are found in the Colombian Emerald deposits at Gachalá, Cundinamarca Department; and at the La Marina Mine, Mun. de Pauna, Boyacá Department. Across the Atlantic, the locality of Mwami (Miami), Karoi District, Zimbabwe has produced deep ink-blue crystals of Euclase with an absolutely incredible color.

Euclase is a silicate of beryllium and aluminium and a rare form of Datolite. It’s not a well-known stone, but it’s very similar to Beryl, only Euclase also has hydrogen. Its colors range from blue, green, to colorless. It is best known for its prismatic crystals with prominent striations and a beautiful blue color with a light tone. Excellent crystal specimens are prized by mineral collectors. Specimens with excellent blue color and high clarity are often faceted into gems for mineral collectors.

Euclase has a hardness of 7.5, which would make it an excellent gem. However, it also breaks easily along planes of perfect cleavage, and that reduces its usefulness as a gem used in jewelry. The name “euclase” is derived from the Greek words eu and klasis, which together mean “good fracture”.

In distinct prismatic crystals that are often somewhat flattend and have a slanted termination. Crystals are usually striated lengthwise, and are often doubly terminated. Crystals usually form individually; crystal clusters are less common.

Uses and Benefits of Euclase –

Euclase is a highly prized collector’s mineral, and those of good color can be among the most expensive minerals. Although hardness, color, and clarity are often presentable in this mineral, its rarity and difficulty in cutting (due to perfect cleavage) limit Euclase from becoming a mainstream gemstone. It is, however, sometimes cut for connoisseur gemstone collectors.

Euclase will transform any form of negativity into something positive. It will help people communicate their thoughts, ideas, feelings, and perceptions. This stone will also stimulate the energies of our mind and amplify our psychic abilities.

If people are guilty of procrastinating, the energies of this stone will clear their mind so that they will not be confused or overwhelmed. Euclase will stimulate their spiritual energy and boost the energies of the mind. It will also connect our heart with our intuition, allowing people to embrace happiness and be influenced by serendipity. This stone will also help people quit harmful patterns and allow them to focus on new energies, especially when they combine it with the March Birthstone.

Euclase facilitates the eradication and control of the pain from arthritis, muscle cramps and muscle tension within the body. If people have cuts, scratches or bruises, an euclase crystal placed on the wound will heal and reduce the pain and swelling due to its antibacterial effect. This stone assists with inflammation and swelling of the organs in the body and encourages healing.

Euclase has been known to reduce the constriction of blood vessels and hardening of the arteries. For those who have headaches that come from sinus problems then this stone will be able to help people, place the crystal over the sinuses or use the crystal water as a nasal spray. If people have difficulties swallowing then taking crystal water will ease the problem. Euclase is an all-round antispasmodic, antibacterial and antiseptic.

Euclase will evoke awareness in people that is centered on the heart, and it will help them speak the truth with honesty and clarity. This stone will show them how they can transform dense and negative energies so that people can clear their energy fields and their environment of them.

Euclase connects to the throat, heart, and third eye chakras, and it will help people recognize the truth in all kinds of situations. People will be able to speak and communicate from the heart with honesty and clarity!