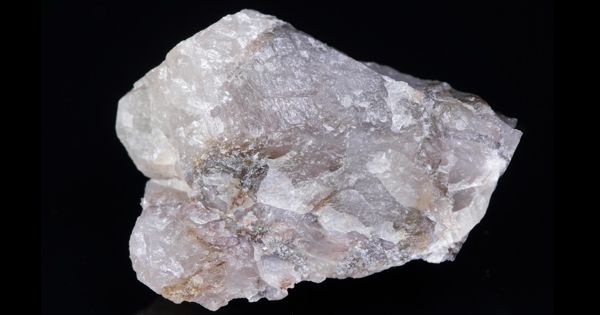 Eucryptite is a mineral consisting of a colorless or white lithium aluminum silicate occurring in hexagonal crystals. It is a lithium-bearing aluminium silicate mineral with the formula LiAlSiO4. It crystallizes in the trigonal – rhombohedral crystal system. It is a silicate of aluminium and lithium associated with albite as alteration products of spodumene. It typically occurs as granular to massive in form and may pseudomorphically replace spodumene. It was named in 1880 by Brush and Dana from the Greek for “well concealed”, in allusion to its occurrence embedded in albite.

Its typical occurrence is in lithium-rich pegmatites in association with albite, spodumene, petalite, amblygonite, lepidolite, and quartz. It is also known as α-eucryptite or alpha-eucryptite.

It has a brittle to conchoidal fracture and indistinct cleavage. It is a colorless or white lithium aluminum silicate mineral, crystallizing in the hexagonal system. It is transparent to translucent and varies from colorless to white to brown. It has a Mohs hardness of 6.5 and a specific gravity of 2.67.

It occurs as a secondary alteration product of spodumene. It was first described in 1880 for an occurrence at its type locality, Branchville, Connecticut. Its name was from the Greek for well concealed, for its typical occurrence embedded in albite.