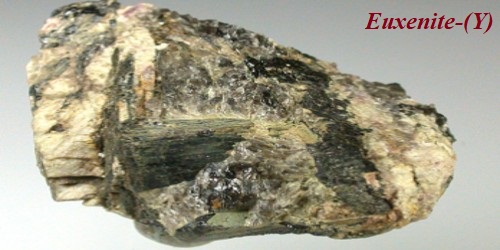 Euxenite or euxenite-(Y) is a brownish black mineral with a metallic luster. It is a mineral that is sometimes called a “trash can mineral”. Because it will accommodate a wide variety of elements in its crystal structure, generally the elements that other minerals do not seem to want. Euxenite forms a continuous series with the titanium-rich polycrase-(Y) having the following formula: (Y,Ca,Ce,U,Th)(Ti,Nb,Ta)2O6

It was first described in 1870 and named for from the Greek (εύξεινος), hospitable or friendly to strangers, in allusion to the many rare elements that it contains. It contains calcium, niobium, tantalum, cerium, titanium, yttrium, and typically uranium and thorium, with some other metals. The chemical formula is: (Y,Ca,Ce,U,Th)(Nb,Ta,Ti)2O6. It is commonly partially amorphous due to radiation damage.

It occurs in granite pegmatites and detrital black sands. It is found in many locations worldwide, notably its type locality in Jølster, Sunnfjord, Norway. Other locations include the Ural Mountains of Russia; Sweden; Minas Gerais, Brazil; Ampangabe, Madagascar; Ontario, Canada; and in Arizona, Wyoming, and Colorado in the US.

Euxenite is used as an ore of the rare earth elements it contains. Rare large crystals have also been used in jewelry. Remember, this is a slightly radioactive mineral and should be stored away from other minerals that are subject to damage from radioactivity and of course human exposure should be limited!