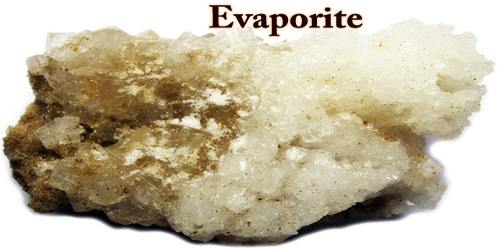 Evaporite (/ɪˈvæpəraɪt/) some of the different minerals present in the sedimentary deposition of soluble salts resulting from the water evaporation. There are two types of evaporite deposits: marine, which might even be described as ocean deposits, and non-marine, which are found in standing bodies of water like lakes. Evaporites are layered crystalline sedimentary rocks formed from brines produced in areas where the quantity of water lost by evaporation exceeds the total quantity of water from rainfall and flow by rivers and streams. 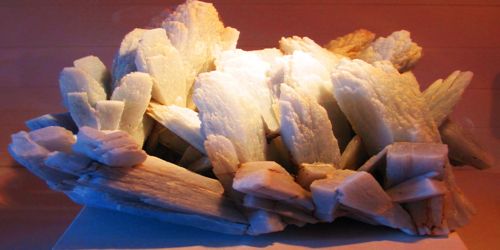 While all water sources on the surface and in aquifers contain dissolved salts, for the minerals to precipitate, the water must evaporate to the atmosphere. Evaporite deposits usually occur in enclosed marine basins where evaporation exceeds inflow. The deposits also exhibit a repetitive mineral series, suggesting cyclic conditions of solubility-determined mineralogy. The residual water is enriched in salts as evaporation occurs, and they precipitate when the water becomes supersaturated.

The mineralogy of evaporite rocks is complex, with nearly 100 varieties possible but volumetrically significant are less than a dozen specimens. Marine evaporites tend to have thicker layers and are typically the subject of larger investigations. They also have a system of evaporation. Minerals in the evaporite rocks include carbonates (especially calcite, dolomite, magnesite, and aragonite), sulfates (anhydrite and gypsum), and chlorides (particularly halite, sylvite, and carnallite), likewise as various borates, silicates, nitrates, and sulfocarbonates. 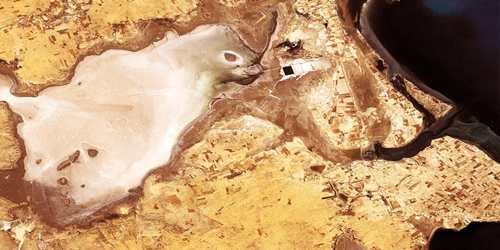 Evaporite deposits occur in sedimentary successions of both the marine and nonmarine. Non-marine evaporites are typically composed of minerals that are not typical in marine environments, since the water from which non-marine evaporite precipitates has amounts of chemical elements that are different from those present in marine environments in general. The most important minerals and also the sequence during which they form include calcite, gypsum, anhydrite, halite, polyhalite, and lastly potassium and magnesium salts like sylvite, carnallite, kainite, and kieserite; anhydrite and halite dominate.

However, about 80 different minerals have been reported to have been found in evaporite deposits (Stewart, 1963; Warren, 1999), but only about a dozen are common enough to be regarded as significant rock formers. Modern evaporites are limited to arid regions (high temperature and low precipitation rates), e.g. on the floors of semidry ephemeral playa lakes in the Great Basin of Nevada and California, in the Middle East coastal salt flats (sabkhas), and in salt pans, estuaries and lagoons across the Suez Gulf. The Great Salt Lake in Utah and the Dead Sea that lies between Jordan and Israel are examples of modern non-marine depositional environments.

Ancient evaporates occur widely within the Phanerozoic geologic record, particularly in those of Cambrian (from 570 to 505 million years ago), Permian (from 286 to 245 million years ago), and Triassic (from 245 to 208 million years ago) age, but are rare in sedimentary sequences of Precambrian age. The most notable documented evaporite depositions occurred in the Mediterranean basin during the Messinian salinity crisis. Extensive thin-shelf deposits are known, as opposed to basin deposits, and are thought to result from shallow, ephemeral seas. 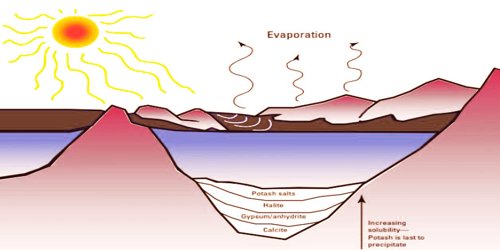 Evaporite deposits don’t need to consist solely of halite rock. In fact, most evaporite deposits do not contain more than a few percent of evaporite minerals, the rest consisting of the more common clastic detrital rocks and carbonates. Evaporite beds tend to focus and promote large thrust fault horizons so structural geologists are especially interested in their existence. Evaporites also have economic significance as a source of salts and fertilizer. Recognition of halite pseudomorphs, sequences composed of some proportion of evaporite minerals, and recognition of mud crack textures or other textures may simply be needed for formation to be recognized as evaporative.

As the amount of seawater is decreased to one-fifth of the initial, evaporite precipitation starts in an orderly fashion, with the more insoluble components (gypsum and anhydrite) first forming. Also, evaporites can be recrystallized easily in laboratories to investigate the conditions and characteristics of their formation. Natural sequences of evaporites indicate vertical changes in mineralogy which are crudely consistent with the ordered appearance of mineralogy as a feature of solubility but less systematic.