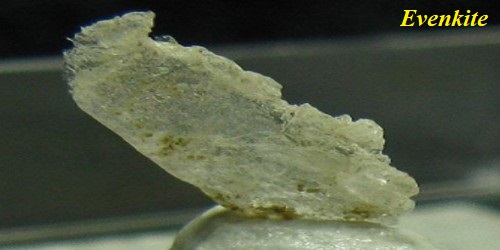 Evenkite is a rare hydrocarbon mineral with formula (CH3)2(CH2)22 or C24H50. Chemically it is n-tetracosane. It is a rare hydrocarbon mineral. It was first discovered by Shropyshev in the Evenkia district of Siberia, Russia by the Nizhnyaya Tunguska River in quartz geodes. Most commonly found with quartz, evenkite is the last part of the geode to form. In a quartz geode, it appears as flaky wax partials on top of the quartz crystals. The formation of Evenkite within the quartz geodes where due to thermal cracking of the organic matter (manly marine plants) that were trapped in the septarian concretions during the Jurassic burial. The French Alps region received a lot of geological uplift after the Jurassic burial which increased temperatures that where being applied to the buried sediments. As a result of the high pressure and temperatures, the hydrocarbon is created within the mineral geode.

It was first described in 1953 for the occurrence of the Khavokiperskiye deposit, Lower Tunguska River, Evenkiysky District, Siberia, Russia, where it occurs in vugs within a quartz vein in welded tuff.

Associated minerals include quartz, chalcedony, pyrite, pyrrhotite, sphalerite, galena, chalcopyrite, and calcite. It was named for the Evenkia district. It has also been reported from the Hautes-Alpes region in France and the Slanské and Vihorlat mountains of Slovakia.