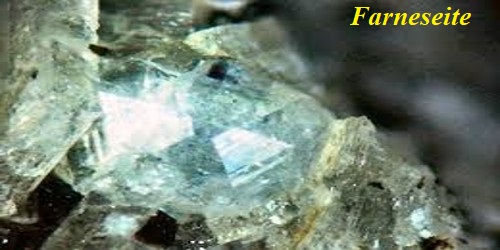 Farneseite is a mineral from the cancrinite sodalite group with 14 layer stacking. It is a complex silicate mineral with formula: (Na, Ca, K)56(Al6Si6O24)7(SO4)12·6H2O. It is a member of the cancrinite-sodalite group, approved in 2004 as a new mineral species. The group is characterized by the number of stacking layers making up each member, with farneseite being one of newest minerals in the group with a 14 layer stacking structure.

Farneseite is named after the discovery location of Farnese. Farnese is located in Viterbo Province, Italy in a region called Lazio. It is a clear transparent mineral and has a The specimens discovered in Farnese were in a pyroclastic rock from the Làtera Cauldera region. They are colorless, transparent and prismatic. Cleavage is poor in the mineral on {001}. It has a vitreous luster and is not fluorescent. The density that was initially calculated is 2.425 g/cm3. Farneseite is brittle and has a conchoidal fracture.

Farneseite has only been reported from its type locality of Latium, which is a volcanic region in Viterbo, Italy. Here, it was found in a pyroclastic rock sequence, believed to be emplaced during the eruptive phases, when the caldera collapsed. The actual processes involved in the formation of the mineral are still enigmatic. Similarly, most other members of the group have also been found in similar conditions in around the same location in Latium.