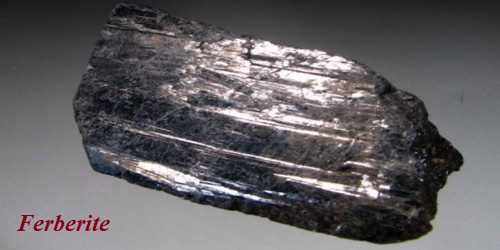 Ferberite is the iron endmember of the manganese – iron wolframite solid solution series. The manganese endmember is hübnerite. It is a mineral consisting of a valuable ferrous tungstate occurring in black granular masses. It is a black monoclinic mineral composed of iron(II) tungstate, FeWO4. Ferberite was discovered in 1863 in Sierra Almagrera, Spain, and named after the German mineralogist Moritz Rudolph Ferber (1805–1875).

Ferberite’s iron content causes the dramatic differences between it and hubnerite (wolframite is of course intermediate). Ferberite occurs as granular masses and as slender prismatic crystals. It has a Mohs hardness of 4.5 and a specific gravity of 7.4 to 7.5. It tends to be black colored, with a black streak, is opaque with a nearly submetallic luster, is denser, has crystals with a different elongation and can be weakly magnetic.

Ferberite typically occurs in pegmatites, granitic greisens, and high-temperature hydrothermal deposits. It is a minor ore of tungsten. Ferberite and hübnerite often contain both divalent cations of iron and manganese, with wolframite as the intermediate species for which the solid solution series is named.