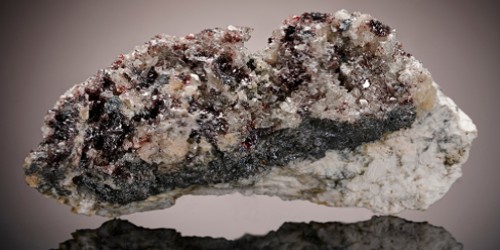 The mineral was first described by Wang and Paniagua (1996) who named it after M. Fettel, a German field geologist who collected the first samples from Odenwald. It was first collected in the Nieder-Beerbach mine, 10 km south of Darmstadt, Odenwald, Germany. The specimen of this rare mineral we have has abundant crystals of Fettelite with colorless crystals of Calcite. In rare associated with ‘Proustite’ and other undefined silver species.

Its normal occurrence is in hydrothermal veins, which can cut gabbro-diorite intrusives. It is closely related to other rare minerals like dervillite, daomanite, vaughanite and criddleite which are also found in the same type locality as fettelite.

Fettelite occurs as clusters of hexagonal flakes. These flakes can get up to 0.2 mm across and around 5-10 µm thick. In more complex hexagonal tablets, somewhat larger subparallel aggregates can be measured. The birefringence of Fettelite is moderate white to grayish brown.