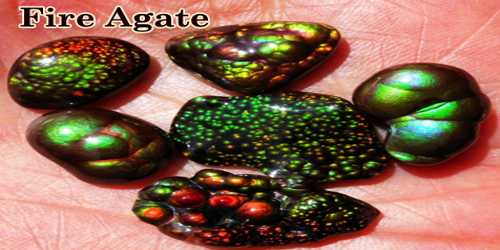 Fire Agate is a semi-precious stone that hails from the Quartz family. It is a rare and interesting gem of unusual beauty. It is a brown agate that reflects bright flashes of iridescent yellow, red, orange and green from hemispherical surfaces within the stone. These hemispherical features are a characteristic crystal habit of agate known as a “botryoidal habit”.

This gemstone discovered so far only in certain areas of central and northern Mexico and the southwestern United States (New Mexico, Arizona and California). Approximately 24-36 million years ago these areas were subjected to massive volcanic activity during the Tertiary Period. The fire agates were formed during this period of volcanism when hot water, saturated with silica and iron oxide, repeatedly filled cracks and bubbles in the surrounding rock.

Fire Agate is actually a form of Chalcedony with captivating colors. Till the present times, this appealing semi-precious stone has been found only at few places around the world. This is the reason why this stone is also considered as a rare stone. It is loved and revered as a spiritual flame of complete excellence. It is believed to contain many interesting mysteries inside it. When you look at this stone with full focus, you can actually observe the beautiful pattern which looks like fire flames.

Some Facts of Fire Agate:

Fire agate is a phenomenal gem. In gemology, a phenomenal gem is one that reacts with the light that enters it to produce an interesting optical effect. In fire agate, the phenomenon is the iridescent colors. They change as the gem is moved, as the light source is moved, or as the head of the observer is moved. The phenomenon of fire agate is reminiscent of the play-of-color of precious opal, yet it is completely different. The name “fire” is used, but the color is not caused by dispersion the phenomenon that causes the “fire” seen in diamond.

Sources and Properties of Fire Agate –

Fire agate is rare and has only been found in commercial quantities in a few locations. These include sites in the states of Aguascalientes, Chihuahua, and San Luis Potosi in Mexico; and, the states of Arizona, California and New Mexico in the United States. The largest number of reported fire agate localities is in Arizona, where the material has been popular with jewelry designers, lapidaries, gem collectors and mineral collectors for about fifty years. The Mexican fire agate hails from the Calvillo mines which are located in the Aguascalientes state of Mexico. Fire agate is all about the dynamic iridescent colors. 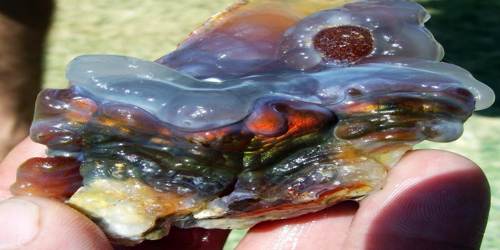 Fire agates are found in captivating hues of red, orange, green, golden or brown. These colors vary from stone to stone because of the iron oxide contents in the stone. Anyone can simply fall in love with fire agate at the very first glance. The vibrant dashes of red, orange, golden and green inside the stone look truly outstanding and mesmerizing. These lively and emphasizing flashes work wonders on a dark red and brown background in fire agates. The exceptional and unmatched iridescence of color in fire agate are caused by the light diffraction. When light interferes with the thin layers of limonite or iron oxide, the stunning iridescence of multiple hues gets created.

Fire agates have beautiful iridescent rainbow colors, similar to opal, with a measurement of hardness on the Mohs scale of between 5 and 7 which reduces the occurrence of scratching when polished gemstones are set in jewelry. The vibrant iridescent rainbow colors found within fire agates, created by the Schiller effect as found in mother-of-pearl, is caused by the alternating silica and iron oxide layers which diffract and allow light to pass and form an interference of colors within the microstructure layering of the stone causing the fire effect for which it is named.

Fire agate represents layered variety of chalcedony. It shows a botryoidal formation which is also called grape-like structure in common terms. It contains the specific gravity of 2.59 to 2.67. The stone contains no cleavage. An easy way to identify fire agate is to look for silicon dioxide composition. Fire agate measures 6.5 to 7 in hardness on the Mohs scale. It has a refractive index of 1.53-1.54.

In fire agate, the botryoidal habit was built as many ultra-thin layers of agate were deposited, one upon another, to produce the unusual shapes that you see in the gem today. Some of these layers of ultra-thin agate were coated with tiny particles of goethite, an iron hydroxide mineral. The colorful “fire” is thought to be produced by interference between light rays as they are reflected and refracted by the ultra-thin layers composed of goethite and agate.

How Fire Agate and Chalcedony Form:

The fire agate and chalcedony of the Southern New Mexico-Arizona border area is formed when low pressure and low temperature epithermal hydrothermal waters (50°-200°C / 122°-392°F) carrying colloidal SiO2 and iron oxides are injected into cavities in volcanic rocks such as gas bubbles in flow rocks, irregular-shaped vug fillings, or along fault or bedding plane fractures.

Approximately 24-36 million years ago these areas were subjected to massive volcanic activity during the Tertiary Period. The fire agates were formed during this period of volcanism when hot water, saturated with silica and iron oxide, repeatedly filled cracks and bubbles in the surrounding rock.

Fire Agate is a protective and grounding stone with a calming energy. It is said to build a protective shield around the body, deflecting ill-wishing and harm and reflecting it back to its source. It stimulates energy and life force and is said to increase sexual vitality and libido.

Fire Agate is thought to help reduce cravings of all types, including food and self destructive thoughts and behavior. Thus being of benefit in the treatment of addictions. It is also believed to instill bravery, courage and spiritual fortitude, it reduces fear and to encourage feelings of security and safety.

In physical healing Fire Agate is believed to aid stomach and circulatory problems.

Fire Agate is most often found in custom and designer jewelry shops that are located in the same regions where the agate is mined. There it is sold as a locally produced gem and many people buy it for that reason. Fire agate is a gem that is known and purchased by local people, visitors to the area, and collectors who want piece of jewelry with a rare, beautiful or unusual gemstone.

Usually this stone is translucent to opaque. The pieces with translucent tendency are coveted more. As far as the luster is concerned, this stone contains a wax type luster to dull luster.

The perfect cut is vital for fire agate. The suitable cut leads to optimum iridescence which is the main attractive feature of this stone. The stone is cut into many freeform of fancy cuts and shapes. The cutting procedure for this stone requires extreme care and experience as one has to work through the multiple layers inside the structure of this beautiful stone. A little carelessness can lead to loss of the beautiful fire flame pattern inside the stone.