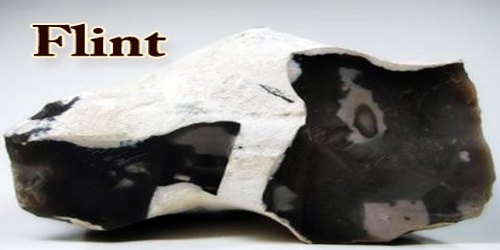 Flint is a sedimentary cryptocrystalline form of the mineral quartz, categorized as the variety of chert that occurs in chalk or marly limestone. Flint was widely used historically to make stone tools and start fires. It is a hard, tough chemical or biochemical sedimentary rock that breaks with a conchoidal fracture. It is a form of microcrystalline quartz that is typically called “chert” by geologists. The nodules can be dispersed randomly throughout the rock unit but are often concentrated in distinct layers. Some rock units form through the accumulation of siliceous skeletal material. These can recrystallize to form a layer of bedded flint.

Flint is highly resistant to weathering and is often found as pebbles or cobbles along streams and beaches. Early people who used flint to make tools often prospected these areas to find nicely shaped pieces of flint for making specific tools.

Flint occurs chiefly as nodules and masses in sedimentary rocks, such as chalks and limestones. Inside the nodule, flint is usually dark grey, black, green, white or brown in colour, and often has a glassy or waxy appearance. A thin layer on the outside of the nodules is usually different in color, typically white and rough in texture. The nodules can often be found along streams and beaches.

Flint does not have a specific color, but is often dark gray with shades of brown, red, or yellow, and sometimes white. Brighter or more colorful variants are sometimes called chert by some people. If a large body of rock is entirely made of dense, dull cryptocrystalline quartz, it is generally called chert, regardless of its color. Flint may show color banding, but this is not a concentric banding as seen in agate.

Flint breaks and chips into sharp-edged pieces, making it useful for knife blades and other cutting tools. The use of flint to make stone tools dates back millions of years, and flint’s extreme durability has made it possible to accurately date its use over this time. Flint is one of the primary materials used to define the Stone Age.

The color can be caused by inclusions of organic compounds (black), metal sulfides (black), and various metal oxides and hydroxides (yellow, orange, brown, reddish, etc.). It is slightly translucent to almost opaque, sometimes only thin chips are translucent at the edges. On freshly broken surfaces the luster is dull, at best waxy, but because it is very hard, flint takes a good polish and assumes a glassy luster, just like agate. 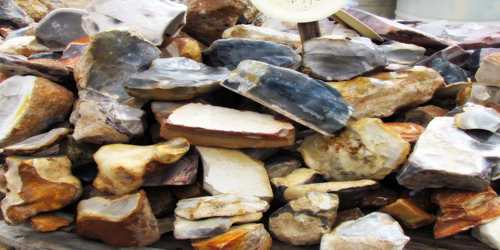 Occurrence and Properties of Flint –

One of the most important localities for flint in eastern North America is Flint Ridge in eastern Ohio. Native Americans discovered this deposit and produced flint from hundreds of small quarries along the ridge. This “Ohio Flint” occurred in distinctive colors and was treasured by Native Americans.

During the Stone Age, access to flint was so important for survival that people would travel or trade to obtain flint. Flint Ridge in Ohio was an important source of flint and Native Americans extracted the flint from hundreds of quarries along the ridge. This “Ohio Flint” was traded across the eastern United States and has been found as far west as the Rocky Mountains and south around the Gulf of Mexico.

When struck against steel, flint will produce enough sparks to ignite a fire with the correct tinder, or gunpowder used in weapons. Although it has been superseded in these uses by different processes (the percussion cap), or materials, (ferrocerium), “flint” has lent its name as generic term for a fire starter.

Flint is not a chemically very pure quartz variety, the large amounts of impurities and its fine-grained structure can make it dull and almost opaque. Some people would say that flint and chert are technically spoken not minerals, but rocks. It is a textural variety of quartz that shares some properties with jasper. It contains considerable amounts of other silica modifications, mostly moganite, perhaps opal. Like jasper, it has a very irregular, grainy structure, whereas agates also a cryptocrystalline quartz variant consist of regularly intergrown tiny quartz crystals that give them a “fibrous” structure. Jasper is almost opaque and typically its colors are more intense, while flint is often a bit translucent. The size of the grains in flint is between 0.5 to 20 micrometers.

Flint sometimes occurs in large flint fields in Jurassic or Cretaceous beds, for example, in Europe. Puzzling giant flint formations known as paramoudra and flint circles are found around Europe but especially in Norfolk, England on the beaches at Beeston Bump and West Runton. Flint can be colored: sandy brown, medium to dark gray, black, reddish brown or an off-white grey.

Flint consists mainly from quartz and mostly it has cryptocrystalline or amorphous structure. In nature it occurs as nodules and interbedded inclusions in sedimentary deposits as a result of digenesis processes when calcium carbonate is replaced with silicia. Bedded chert primarily is accumulations originated from excess alkalinity in the sediments. Flint can also be formed in the crystallization processes of the chemically unstable amorphous silicia. In this context, it should be noted that flint is naturally heterogeneous and very varied material by the physical properties and therefore problematic in many contemporary studies.

The most interesting physical property of flint is the way it splits. Flint has a conchoidal fracture like rock crystal or glass, but its fracture surfaces are not as uneven and curved. It’s easier to control the direction of the splitting, and the edges are more straight. This depends a little bit on the amount of impurities, “purer” flint behaves more like glass. Chips coming off a flint can have razor sharp edges, making it suitable as a cutting tool.

In the area that is now the Texas panhandle, Native Americans discovered an area where weathered flint littered the ground. This flint was weathering out of a dolomite beneath the thin soil cover. These people discovered that fresh, unweathered flint of high quality could be obtained by digging down a few feet.

From about 13,000 years ago into the 1800’s, this area was continuously mined for the high-quality flint. The flint was used to produce projectile points, scrapers, knives, and other stone tools. In the 1800’s the flint was also mined for use as gunflints. Over 700 small quarries are still visible today and have been preserved as part of the Alibates Flint National Monument.

The name “flint” has been so closely associated with starting fires that man-made materials used to produce sparks in cigarette lighters and survival kits have been given the name “flints.” 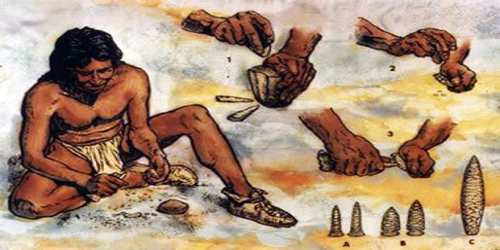 Flint was used in the manufacture of tools during the Stone Age as it splits into thin, sharp splinters called flakes or blades (depending on the shape) when struck by another hard object (such as a hammerstone made of another material). This process is referred to as knapping. To combat fragmentation, flint/chert may be heat-treated, being slowly brought up to a temperature of 150 to 260 °C (300 to 500 °F) for 24 hours, then slowly cooled to room temperature. This makes the material more homogeneous and thus more knappable and produces tools with a cleaner, sharper cutting edge. Heat treating was known to stone age artisans.

Where flint is abundant it is sometimes used as a construction material. It is very durable and resists weathering better than almost any other natural stone. It is common to see walls, homes, and larger buildings that are built partially or entirely with flint as a facing stone in southern England and many parts of Europe.

When struck against steel, a flint edge produces sparks. The hard flint edge shaves off a particle of the steel that exposes iron, which reacts with oxygen from the atmosphere and can ignite the proper tinder. Prior to the wide availability of steel, rocks of pyrite (FeS2) would be used along with the flint, in a similar (but more time-consuming) way. These methods remain popular in woodcraft, bushcraft, and amongst people practising traditional fire-starting skills.

Flint has a homogeneous structure and its surface is smooth and not grainy as most rocks. It is thus much less susceptible to grinding. It is quite tough and not as brittle as crystalline quartz. Although the structure is homogeneous, it is not crystalline and stress will dissipate in the material, whereas in a crystal a stress-induced small crack will often propagate through the entire crystal and split it.

Flint and steel used to strike sparks were superseded by ferrocerium (sometimes referred to as “flint”, although not true flint, “mischmetal”, “hot spark”, “metal match”, or “fire steel”). This man-made material, when scraped with any hard, sharp edge, produces sparks that are much hotter than obtained with natural flint and steel, allowing use of a wider range of tinders. Because it can produce sparks when wet and can start fires when used correctly, ferrocerium is commonly included in survival kits. Ferrocerium is used in many cigarette lighters, where it is referred to as “a flint”. Flint bracelets were known in Ancient Egypt, and several examples have been found.