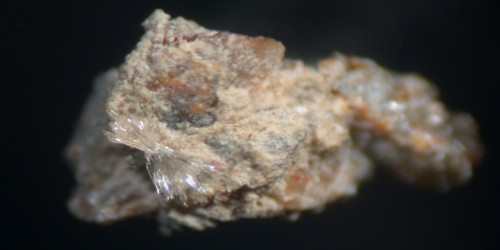 Fluckite is an arsenate mineral with the chemical formula CaMnH2(AsO4)2·2(H2O). It is a rare mineral of post-mine origin that forms as a low-temperature product of the reaction of carbonate gangue with arsenic solutions that were derived from arsenic. It was named to honor Pierre Fluck, a mineralogist of the Louis Pasteur University in Strasbourg, France, and the first to find the mineral.

Fluckite was first described in 1980 for an occurrence in the Gabe-Gottes Mine in Haut-Rhin, Alsace, France, and named for mineralogist Pierre Fluck of Louis Pasteur University in Strasbourg, France. This environment occurs at the type locality in the Gabe Gottes mine in Haut-Rhin, near Sainte-Marie-aux-Mines, France. Other localities for Fluckite include in the Czech Republic at Jachymov in Bohemia, and in the United States at the Sterling mine near Franklin, New Jersey.

The mineral was found in at a depth of 100 m (330 ft). It occurs as a post-mine phase on carbonate gangue. It occurs in association with native arsenic, tennantite, skutterudite, sainfeldite, pharmacolite, villyaellenite, picropharmacolite, calcite, dolomite, ankerite, and quartz.