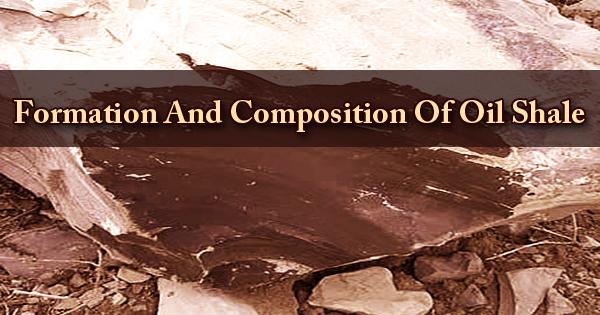 Formation And Composition Of Oil Shale

Oil shale is generally described as a fine-grained sedimentary rock containing organic matter (kerogen) that, upon destructive distillation, yields significant amounts of oil and combustible gas. Shale oil is a replacement for traditional crude oil, but the extraction of shale oil from oil shale is more expensive, both financially and in terms of its environmental effects, than the production of conventional crude oil. Oil shale deposits exist around the world, including large deposits in the United States. Generally speaking, an oil shale deposit with economic potential is one that is at or near enough to the surface to be produced through open-pit or traditional underground mining or in-situ techniques.

As a precursor to oil and natural gas, oil shale can be thought of. Kerogen will heat through its “oil window” or “gas window” with more pressure and over more geological time (the temperature at which it would release crude oil or natural gas). Heating oil shale to a sufficiently high temperature causes a vapor to be formed by the chemical process of pyrolysis. When the vapor is cooled, the unconventional liquid shale oil is isolated from the fuel oil-shale gas (the term shale gas can also refer to gas occurring naturally in shales). Oil shale, a sedimentary rock, is found throughout the world, including China, Israel, and Russia. However, the United States has the most shale wealth. 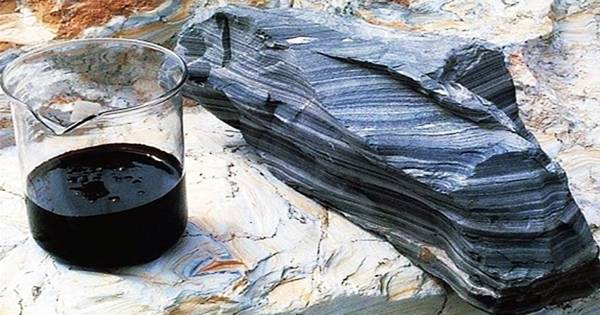 Formation and composition of oil shale

In ancient lakes, oceans, and small terrestrial water bodies such as bogs and lagoons, oil shale was formed from sediments laid down. Oil shales, especially those of tectonic origin, deposited in large lake basins are typical of considerable thickness in sections. According to the petrologist Adrian C. Hutton of the University of Wollongong, oil shale are not “geological nor geochemically distinctive rock but rather ‘economic’ term.” Their common defining characteristics are low solubility in low-boiling organic solvents and thermal decomposition generation of liquid organic products. Mineralogically, the deposits, probably associated with volcanic tuff and evaporite mineral deposits are composed of marlstone or argillaceous mudstone.

Oil shale typically varies in organic content and oil yield. Commercial grades of oil shale range from approximately 100 to 200 liters per metric ton (l/t) of rock, as determined by their shale oil yield. Oil shale deposited in shallow marine environments is thinner but larger in size than shale of lacustrine origin. While carbonates also exist, the mineral fraction is mainly clay and silica. Oil shale varies from bitumen-impregnated rocks, humic coals, and carbon shale (oil sands and petroleum reservoir rocks). During the Cambrian Era, extensive deposits of black shales of this variety were formed in northern Europe and Siberia; the Silurian Period in North America; the Permian Period in southern Brazil, Uruguay, and Argentina; the Jurassic Period in Western Europe; and in Italy, Sicily, and California, the Miocene Epoch of the Neogene Period.

Although oil sands derive from the biodegradation of oil, kerogen in oil shale has not (yet) been converted into petroleum by heat and pressure, meaning that its maturation does not surpass early mesocatagenetic values. In a range of depositional habitats, from fresh-water to intensely saline reservoirs, epicontinental marine basins, and subtidal shelves, and limnic and coastal swamps, oil shales have been deposited, usually associated with coal deposits. Oil shale is made up of solid organic matter which is mixed into an inorganic mineral matrix. The chemical content of minerals consists mainly of silicon, calcium, aluminum, magnesium, iron, sodium, and potassium found in minerals such as silicate, carbonate, oxide, and sulfide.

Since the early 20th century, the different oil shale deposits that have been mined around the world have ranged from shale to marlstone to carbonate mudstone. The mineral part of some oil shales consists of carbonates, with smaller quantities of aluminosilicates, including calcite, dolomite, and siderite. The reverse is valid for other oil shales: silicates are dominant, including quartz, feldspar, and clay minerals, and carbonates are a minor component. In oil shale, the mineral matter contains various fine-grained silicates and carbonates. Quartz, feldspars, clays (mainly illite and chlorite), carbonates (calcite and dolomites), pyrite, and some other minerals can be present in the inorganic matrix.

Rich oil shale, burning with a sooty flame, has low density, and is flammable. Oil shale, however, is very resistant to the oxidizing effects of air. While shale oil is not competitive with petroleum, natural gas, or coal in today’s world market, it is used in many countries that have easily exploitable oil shale reserves but lack other fossil fuel resources. The exterior structure is typically laminar; alternating darker and lighter layers, or varves, are seen in a cross-section, due to annual cycles of deposition and accumulation of organic matter. On the basis of their composition, geologists may classify oil shales as carbonate-rich shales, silica shales, or cannula shales.

Some oil shale kerogens consist almost entirely of visible algal remains, while other forms are a mixture of amorphous organic matter and only certain organic traces that can be identified. On a dry-weight basis, the gross heating value of oil shales ranges from around 500 to 4000 kilocalories per kilogram (kcal/kg) of rock. Estonia’s high-grade Kukersite oil shale, which fuels many power plants, has a heating value of approximately 2,000 to 2,200 kcal/kg. Typically, only a small portion of the kerogen in oil shale consists of identifiable organic remnants. The remainder is amorphous, presumably due to alteration during sedimentation by microbes. The mining of an oil-shale deposit may be hampered by structural deformation, while igneous intrusions may have thermally degraded the organic matter. Thermal modification of this sort may be limited to a small part of the reservoir, or it may be widespread, rendering much of the reservoir unfit for shale oil recovery.